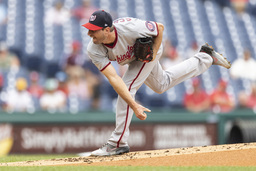 Washington Nationals starting pitcher Max Scherzer throws during the first inning of a baseball game against the Philadelphia Phillies, Thursday, July 29, 2021, in Philadelphia in the first game of a doubleheader. (AP Photo/Laurence Kesterson)