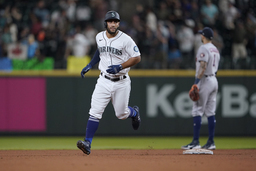 Seattle Mariners' Abraham Toro rounds the bases after hitting a two-run home run against the Houston Astros during the ninth inning of a baseball game, Tuesday, July 27, 2021, in Seattle. Toro was traded to the Mariners from the Astros earlier in the day. The Astros won 8-6. (AP Photo/Ted S. Warren)