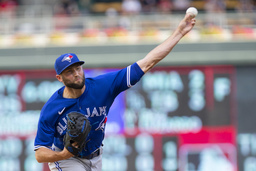 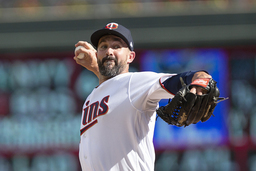 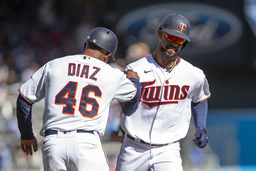 Minnesota Twins' Byron Buxton is congratulated by third base coach Tony Diaz after hitting a home run in the fifth inning of a baseball game against the Toronto Blue Jays, Sunday, Sept. 26, 2021, in St. Paul, Minn. (AP Photo/Andy Clayton-King) 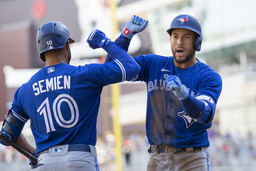 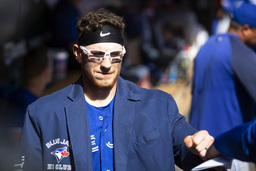 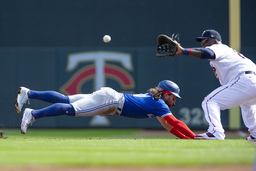 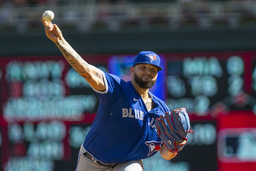 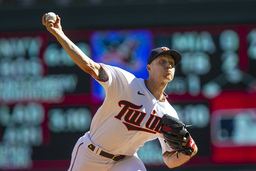 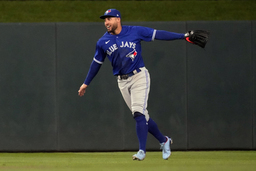 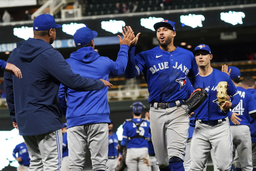 Toronto Blue Jays centerfielder George Springer, center, and other players go through the celebration line after the Blue Jays' 6-1 win over the Minnesota Twins in a baseball game, Saturday, Sept. 25, 2021, in Minneapolis. Springer hit a two-run home run in the game. (AP Photo/Jim Mone)

Toronto will enter the final week one game back for the second AL wild card. The New York Yankees and Boston were tied for the wild-card lead heading into their game on Sunday night.

''We just have to win,'' said Toronto manager Charlie Montoyo. ''I'm so proud of this team, to be where we are right now. They deserve all the credit.''

Alek Manoah (8-2) won his third straight start, giving up two runs and six hits in 5 2/3 innings with eight strikeouts and two walks. The rookie has 25 strikeouts in his last three outings.

Manoah and three relievers combined to strike out 15.

''You want to show up and you want to give the team a chance, because right now everything's a little stick,'' Manoah said. ''You've got to go out there and compete and just understand what's at stake.''

The Blue Jays head home to the Rogers Centre in Toronto, which was recently allowed to double the capacity for games. That means 30,000 fans will be there when the Blue Jays take on the Yankees in a pivotal series.

Griffin Jax (3-5) gave up four runs and six hits in five innings as the Twins lost their second in a row following a four-game winning streak.

''At every point, really, we felt like we were absolutely in the game,'' Twins manager Rocco Baldelli said.

Jansen homered in the second after a pair of one-out bloop singles by Corey Dickerson to left and Santiago Espinal to center.

Jake Cave hit an RBI single in the bottom half.

Springer homered in the fifth, a drive that like Jansen's went into the bullpen in left-center field. Both players put on Toronto's home run jacket - the Blue Jays have hit a major league-high 248.

Springer's homer was his second in as many days after going homerless in 12 straight games.

Teoscar Hernandez hit an RBI double in the eighth and leads the major leagues with 112 RBIs, including a big league high 64 since the All-Star break.

Byron Buxton homered in the fifth, his career-best 16th in just 55 games this season.

''He's been basically the best player in baseball for the time he's had on the field,'' Baldelli said of Buxton. ''Buck's a great player. We see it every day when he's out here.''

Blue Jays: LF Lourdes Gurriel Jr., who injured his right hand Tuesday, remains day-to-day. Montoyo said Gurriel has a large cut on his hand where he grips the bat. ''We'll see how he is by Tuesday,'' Montoyo said.

Twins: RHP Joe Ryan, who was placed on the bereavement list on Saturday, is scheduled to return to the rotation Thursday when he'll start against the Detroit Tigers. ''We don't want him coming back and rushing him back into his start off of just playing catch while he's away,'' manager Rocco Baldelli said. ''We want to make sure he's able to settle in, throw a bullpen at some point when he returns and be ready to go.''