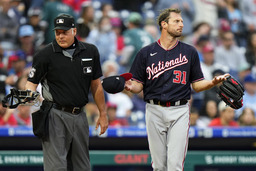 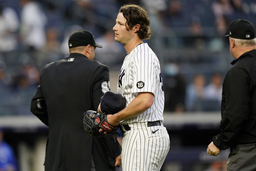 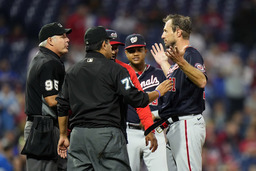 Washington Nationals pitcher Max Scherzer, right, is checked for foreign substances during the middle of the fourth inning of a baseball game against the Philadelphia Phillies, Tuesday, June 22, 2021, in Philadelphia. (AP Photo/Matt Slocum) 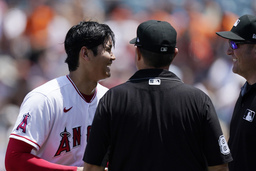 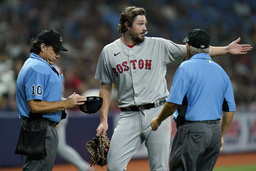 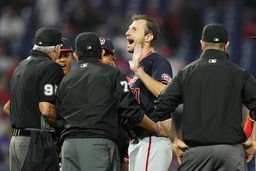 Washington Nationals pitcher Max Scherzer reacts as he talks with umpires during a foreign substances check in the middle of the fourth inning of a baseball game against the Philadelphia Phillies, Tuesday, June 22, 2021, in Philadelphia. (AP Photo/Matt Slocum) 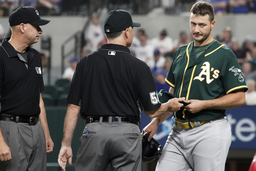 Oakland Athletics relief pitcher Burch Smith has his glove and hat checked by the umpires after he pitches in the sixth inning against the Texas Rangers in a baseball game Tuesday, June 22, 2021, in Arlington, Texas. (AP Photo/Louis DeLuca) 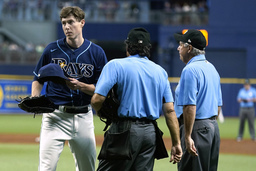 Tampa Bay Rays pitcher Ryan Yarbrough, left, walks off after being checked for foreign substances by umpires Phil Cuzzi, center, and Tom Hallion, right, after Yarbrough was taken out of the game against the Boston Red Sox during the third inning of a baseball game Tuesday, June 22, 2021, in St. Petersburg, Fla. (AP Photo/Chris O'Meara)

NEW YORK (AP) Kansas City manager Mike Matheny warned opponents that if they act like Philadelphia's Joe Girardi and ask umpires to check Royals pitchers for sticky substances, it would provoke his team.

New York Yankees reliever Zack Britton and Max Scherzer, members of the players' association's executive committee, called on Major League Baseball to end on-field checks by umpires and replace them with monitors who would conduct inspections in clubhouses, dugouts and bullpens.

''If I'm a young kid at the game and I'm asking my dad, `Well, hey, what's going on? Why they getting checked?' What he's going to say? `Well, they think everyone's cheating,'' Britton said Wednesday. ''I mean, is that what we want the game to be about, like we're assuming you're cheating? I just think it's a bad look.''

On-field exams of pitchers started Monday, a week after baseball Commissioner Rob Manfred announced a crackdown on unauthorized grip substances. When umpire Alfonso Marquez approached Scherzer for a third time during Tuesday's game, as requested by Girardi, the three-time Cy Young Award winner tossed his glove and hat to the ground, unbuckled his belt and appeared ready to take off his pants.

''I will say this: If somebody goes hunting for something on one of our guys, I'll guarantee we're going to have every guy on that bench and every other eye we can get on what might be happening. But that's not a road I want to go down,'' Matheny said Wednesday at Yankee Stadium. ''Let's let the umpires do what they're told to do.''

When Oakland reliever Sergio Romo was checked by the umpires after pitching the seventh inning on Tuesday night, the veteran right-hander flung his belt onto the turf and dropped his trousers.

Britton said while the goal of eliminating sticky substances was laudable, the method of enforcement was hurtful.

''I just think the optics are just absolutely embarrassing for our game, and that's not what I want to wake up and read about regarding our game in the morning. But there's a better way to do it. But it takes more than just me or other players saying it,'' he said. ''It takes talking with MLB and sitting down and hashing something out to where we can enforce rules but not in the way that it's being enforced.''

Cole also serves on the executive subcommittee, which along with the union staff supervises collective bargaining to replace the labor contract that expires on Dec. 1.

Britton said there have not been talks between the union and MLB in several weeks on foreign substances.

Nationals general manager Mike Rizzo criticized Girardi during an interview on Washington's 106.7 The Fan. The Phillies manager said he became suspicious because Scherzer was touching his hair more than usual on the mound.

Scherzer said he did that because he couldn't grip the ball and needed moisture on his fingers. He also said he got tired of tasting rosin.

''To check Scherzer, I thought was a little over the top. I mean, he's pretty smart,'' Britton said. ''He's not going to be doing anything. But it's part of what the game may look like from here on out where managers would check pitchers.''

Mets ace Jacob deGrom was the first pitcher checked under the new policy - he pitched the opener of a doubleheader Monday against Atlanta at Citi Field and calmly went through the protocol.

''The best on the planet, he had no problem with it. You saw deGrom,'' Boston manager Alex Cora said. ''Obviously Max, that was a different situation. Something that we have the green light to do and obviously they took exception and he got upset.''

''But the other ones, you saw deGrom. He smiled, gave the glove, gave the hat, check my belt and let me go out there and dominate again. The greatest right now, the best on the planet doesn't complain, everyone should follow suit,'' he said.

Britton said the checks would unnecessarily increase tension between players and umpires. He faulted Manfred for not speaking with media on the matter. Manfred did not hold a news conference after the June 3 owners' meeting when MLB first said a crackdown would be upcoming.

''It's just players speaking out about it. I would love to hear someone from MLB answer questions from the media, like we do every day,'' Britton said. ''I would like to hear from Manfred. He's the commissioner of the game. I'd love to hear Manfred answer the questions and not his players.''

''So, yeah, I think it's frustrating for the players that we haven't heard anything from him yet,'' he said.

Britton said Statcast metrics could be used for probable cause for enhanced checks based on pitchers' revolutions per minute.

''Nowadays you can kind of find out where a guy's average spin rate would be and if it's jumping,'' he said. ''Just use common sense, right?''