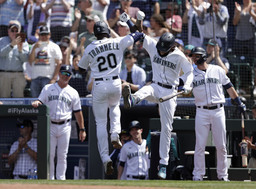 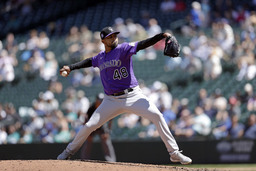 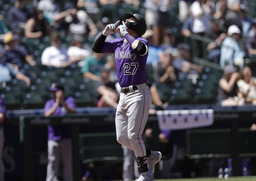 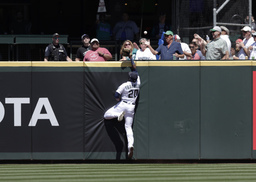 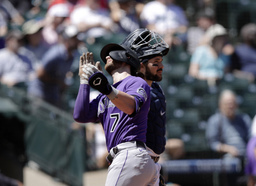 Marquez missed out on his bid to be perfect, settling instead for arguably his most dominant start of the season.

''I thought it might happen because I thought his stuff was good,'' Rockies manager Bud Black said. ''I mean the fastball was live, had velocity and movement, the breaking ball was sharp. He was throwing strikes and his pitch count was manageable. So yeah, so I did think about.''

Trevor Story homered twice, Marquez took a perfect game into the sixth inning and the Colorado Rockies beat the Seattle Mariners 5-2 on Wednesday for just their sixth road victory this season.

Story had a solo shot in the fourth and a two-run homer in the eighth. Brendan Rodgers also hit a two-run drive, more than enough offensive punch to back Marquez, whose perfect game was broken up by Taylor Trammell's solo homer.

Marquez has had several overpowering performances over the past five weeks, allowing one earned run or fewer in seven of his past nine starts. The only blemishes in that time has been two outings against Cincinnati, during which he allowed a combined 12 earned runs and 20 hits.

Marquez (6-6) allowed just two baserunners in eight innings against Seattle while striking out seven. He was perfect for 5 2/3 innings, balancing his fastball, slider and curve to induce plenty of weak contact.

Marquez's bid for perfection ended on the first pitch to Trammell, who smacked a hanging slider over the right field wall.

Kyle Seager had an RBI bunt single against the shift after J.P. Crawford doubled in the ninth. Seattle brought the tying run to the plate, but Daniel Bard struck out Jake Bauers to complete his 10th save.

The Mariners had their winning streak snapped at five games but still finished off a successful 7-2 homestand.

''We look at our homestand and we had a number of different players step up. Big hits, quality at bats,'' Seattle manager Scott Servais said. ''But there's still plenty of room.''

Seattle starter Justus Sheffield (5-7) continued his rocky, homer-plagued season. He failed to make it five innings for the second time in three starts and was hit hard by the Rockies even if he allowed only four hits.

Rodgers' long ball in the second was his fourth of the season and Story's line drive shot to left field leading off the fourth was his seventh. Sheffield has allowed 13 home runs in 68 innings pitched. He allowed two homers in 55 1/3 innings last season.

Both Servais and Sheffield said mechanics have been an issue for the lefty.

''I just got to continue to work in between outings to where when I get out there to game action, it's just compete from then on and you don't think about mechanics,'' Sheffield said.

Ramiel Tapia's 18-game hitting streak came to an end. He grounded out four times - three times to third base - and walked in his five plate appearances. Tapia's streak was the second-longest in the majors this season.

IF/OF Chris Owings appeared in his first game since April 9 after coming off the 60-day injured list. Owings was hitless in four at-bats with three strikeouts as the DH. Owings missed more than two months following left thumb surgery.

The No. 9 hitter in Seattle's lineup has homered in three straight games for the first time in 26 years. Shed Long Jr. homered from that spot in the previous two games and Trammell was hitting ninth Wednesday. The last time Seattle accomplished the feat was all by the same player, when Dan Wilson homered in three straight games in Sept. 10-12, 1995.

Rockies: RHP Jon Gray (4-6, 4.29) is expected to return from the injured list and start Friday's opener of a series in Milwaukee. Gray made a rehab start with Triple-A Albuquerque last Sunday after missing time with a right flexor strain. His last start came on June 4 against Oakland when he allowed five runs in 2 1/3 innings.

Mariners: Following a day off, the Mariners open a road trip against the White Sox on Friday. LHP Yusei Kikuchi (4-3, 3.46) will start the opener. Kikuchi has pitched seven innings in each of his past two starts and allowed one earned run.