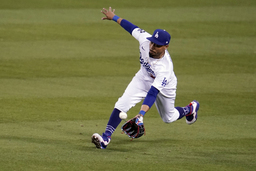 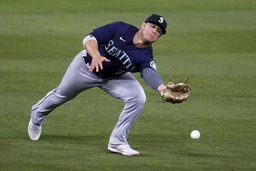 Seattle Mariners second baseman Ty France reaches for but can't catch a fly ball from Los Angeles Dodgers' Will Smith during the fourth inning of a baseball game Wednesday, May 12, 2021, in Los Angeles. Smith singled on the play. (AP Photo/Marcio Jose Sanchez) 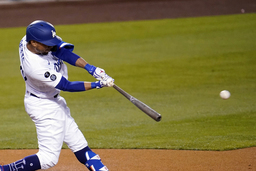 Los Angeles Dodgers' Mookie Betts connects for a double during the third inning of the team's baseball game against the Seattle Mariners on Wednesday, May 12, 2021, in Los Angeles. (AP Photo/Marcio Jose Sanchez) 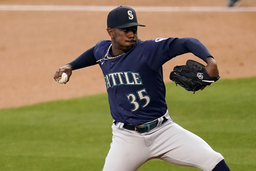 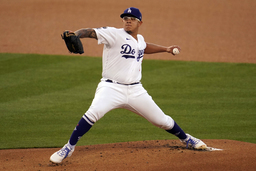 LOS ANGELES (AP) After 3 1/2 terrible weeks of play unbecoming of a World Series champion, the Los Angeles Dodgers think they're getting it together again.

The way this spring has gone for the Dodgers, two wins in a row are cause for celebration and reason for hope.

Max Muncy homered for the second straight game for the defending World Series champions, who opened a nine-game homestand by sweeping this two-game interleague series and interrupting their early-season stretch of surprising ineptitude.

''Just all around, we're playing much better,'' Dodgers manager Dave Roberts said. ''We have too good of talent to see guys continue to struggle collectively. It's nice to come out of it and put some wins together. It's just a sign of our club playing good baseball.''

Los Angeles was 13-2 on April 17 before its skid began the next day. Before the Mariners arrived at Chavez Ravine, the Dodgers had lost 15 of 20 and fallen into third place in the NL West, the division they've won for eight consecutive seasons.

The Dodgers never panicked, and they're finally seeing consistent rewards for their patience. They've also won three of four for the first time since mid-April.

''We have a very good team,'' Muncy said. ''We have a lot of guys with a lot of good heads on their shoulders. What we just went through was frustrating to say the least, but hopefully we can get back to doing what we do best.''

Beaty had a two-run double in the fourth, and he added an RBI single during the Dodgers' four-run fifth in a rally that began with Muncy's two-run homer.

Justin Dunn (1-1) pitched three solid innings before coming apart in the fourth for Seattle, which finished a five-game road trip with four straight defeats. Dylan Moore had an RBI single for the Mariners, who managed just two singles in their 11th loss in 16 games.

The Mariners are thrilled to say goodbye to Urias, who is 2-0 against Seattle this season with 17 strikeouts and just three hits allowed over 14 innings.

''Certainly we struggled against Urias,'' Seattle manager Scott Servais said. ''He's tough. He has our number. We didn't do much against him at all.''

After Justin Turner and Muncy opened the fourth with walks, Beaty eventually drove them both home with a bases-loaded double to right, chasing Dunn. Beaty has 14 RBIs in his seven May starts.

''They're the World Series champions for a reason,'' Dunn said. ''One through nine, they're a good lineup. They do a really good job picking out what they want to hit. ... I don't think I threw the ball terrible, (but) they make you pay when you fall behind counts and get in their counts.''

Ty France poked a one-out single through the left side to break up Urias' perfect game bid in the fifth, and he scored on Moore's short single.

Muncy reached base four times and scored three runs. He singled and eventually scored on pinch-hitter AJ Pollock's single in the seventh.

Urias (5-1) bounced back superbly from last weekend in Anaheim, where he took his first loss since 2019. The hero of last year's World Series-clinching victory retired Seattle's first 13 hitters and yielded only two singles and a walk, striking out six while pitching with his usual first-strike precision.

''You try to attack,'' Urias said through a translator. ''That's what great pitchers do well. They attack and get ahead, and that's what I was focused on doing myself.''

Dodgers: 3B Edwin Rios will miss the rest of the season after surgery to repair a partially torn labrum in his right shoulder. Rios was batting .078 this season while clearly struggling with his swing. ... RHP Dustin May had Tommy John surgery Wednesday. The promising redhead won't pitch again until the summer of 2022 at the earliest.

Mariners: Top pitching prospect Logan Gilbert will make his major league debut when Seattle opens a home series Thursday against Cleveland. Gilbert was the 14th overall pick in the 2018 draft, and he made his Triple-A debut last Friday.

Dodgers: After a day off, Clayton Kershaw (5-3, 2.62 ERA) opens a three-game series against the Marlins. The ace has thrown 13 innings of scoreless, four-hit ball with 20 strikeouts in his last two starts against Miami, both in 2019.