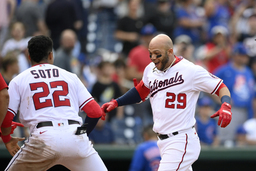 Washington Nationals' Yadiel Hernandez (29) celebrates his walkoff home run with teammate Juan Soto (22) as he heads toward home during the ninth inning of a baseball game against the Chicago Cubs, Sunday, Aug. 1, 2021, in Washington. (AP Photo/Nick Wass) 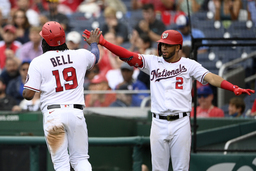 Washington Nationals' Josh Bell (19) is greeted by Luis Garcia (2) as he scores on a single by Yadiel Hernandez during the third inning of a baseball game against the Chicago Cubs, Sunday, Aug. 1, 2021, in Washington. (AP Photo/Nick Wass) 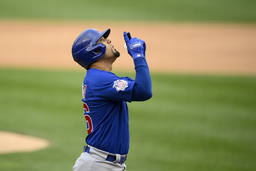 WASHINGTON (AP) Yadiel Hernandez's solo shot in the ninth inning - his second homer of the day - gave the Washington Nationals a 6-5 victory over the Chicago Cubs on Sunday.

Hernandez's four-hit day helped the Nationals overcome three home runs by Rafael Ortega of the Cubs. Washington took two of three in this series against Chicago following trade deadline selloffs that scattered many of the players who helped both teams win the World Series recently.

Ortega tied a franchise record for homers in a game, leading off with a shot to right-center before adding two-run blasts in the sixth and eighth. He was the first Cub with a three-homer game since Kris Bryant on May 17, 2019, also against the Nationals.

Bryant, Javier Baez and Anthony Rizzo were among those traded by Chicago. The Nationals dealt away Max Scherzer, Trea Turner and others as part of their roster teardown. Those departures mean expanded looks for players like Hernandez, a 33-year-old Cuban who only made his major league debut last year and was largely a reserve this season.

''He's been up and down a long road to get to the major leagues and he's just having fun,'' Washington manager Dave Martinez said. ''Whenever he gets an opportunity, he does well.''

Hernandez led off the ninth with a shot into the left field bullpen off rookie Manuel Rodriguez (0-1). Hernandez, who slid into the cleanup spot for the first time this season Saturday, is 11 for 18 with nine RBIs in 10 games since July 17.

''I told myself today I was going to keep him in the game,'' said Martinez, who replaced Hernandez in a double switch Saturday. ''I joked around with him: `Hey, you have to play defense. Catch the ball and play defense.' He's awesome and he understands. He's just a good hitter.''

Hernandez's solo shot in the seventh was his first homer since May 16.

''I don't plan on hitting two home runs or any home runs at all,'' Hernandez said. ''There's times where I feel good up there and I look for a particular pitch and I feel like if I can get that particular pitch, I can take advantage of it and things can happen. I feel like that's kind of what happened today.''

Ortega, batting leadoff, had four hits and drove in all five runs for the Cubs, who have lost five of six. Ortega hit four home runs in the final two games of the series after belting just five in his previous 191 career games.

''He's on fire,'' Cubs manager David Ross said. ''He's been such a catalyst at the top for us since moving up there.''

Ortega hit his first two home runs off Washington starter Erick Fedde, who had little other trouble in six innings. He allowed four hits while striking out eight.

The Nationals took the lead against Adbert Alzolay in the third when Josh Bell smacked an RBI single to left. Ian Happ's throw to the plate was wide, and when catcher Robinson Chirinos fired to second, no one was covering home. Juan Soto, who began the play on first, scampered home.

Bell then scored on Hernandez's single. Bell drove in another run on a single in the fourth to make it 4-1.

Alzolay allowed four runs on seven hits in five innings. He is winless in his last nine starts.

Nationals: An MRI exam on INF Alcides Escobar's wrist was negative. Escobar, who did not play in the Nationals' last two games, had significant swelling and had to have the wrist drained.

Washington optioned RHP Tanner Rainey to Triple-A Rochester. Rainey is 1-2 with a 7.20 ERA in 31 games, and Martinez said he will pitch every other day for Rochester. ''I explained to him that in the future, him and Finnegan are going to close out games for us, and I want him to hone in on his mechanics and pump strikes,'' Martinez said.

Cubs: Chicago is off Monday. Its road trip continues Tuesday in Colorado when RHP Zach Davies (6-7, 4.39 ERA) starts against the Rockies to begin a three-game series.

Nationals: RHP Josiah Gray (0-0, 6.75), who was acquired Friday from the Dodgers as part of the deal that sent Scherzer and Turner to Los Angeles, will make his Washington debut Monday against Philadelphia. Gray was placed on the active roster Sunday.