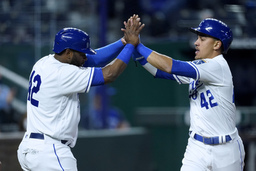 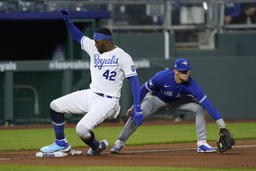 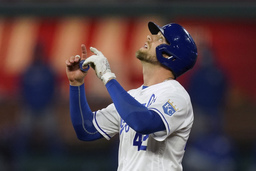 Kansas City Royals' Hunter Dozier celebrates at second base after hitting an RBI-double during the fourth inning of a baseball game against the Toronto Blue Jays, Thursday, April 15, 2021, in Kansas City, Mo. (AP Photo/Charlie Riedel) 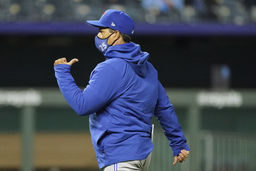 Toronto Blue Jays manager Charlie Montoyo walks back to the dugout after making a pitching change during the fourth inning of a baseball game against the Kansas City Royals, Thursday, April 15, 2021, in Kansas City, Mo. (AP Photo/Charlie Riedel) 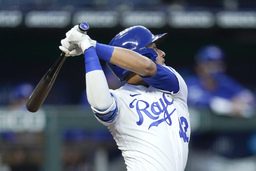 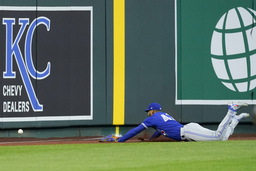 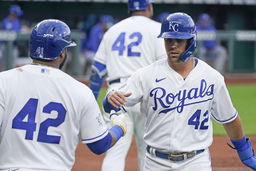 Kansas City Royals' Whit Merrifield, right, celebrates with Carlos Santana after he scored on a double by Andrew Benintendi during the first inning of a baseball game against the Toronto Blue Jays Thursday, April 15, 2021, in Kansas City, Mo. (AP Photo/Charlie Riedel)

Jakob Junis ran his scoreless streak to 14 innings. The offense pumped out five extra-base hits, stringing enough together to produce a seven-run lead. And when Kansas City's bullpen was on the ropes, Scott Barlow retired hot-hitting Bo Bichette and Vladimir Guerrero Jr. to leave the potential tying run on base and earn the save.

All of which left Matheny stumped when he walked into the postgame clubhouse Thursday night.

''There was no music,'' he said. ''I heard people yelling at Brady Singer - I don't know if they've made him the impromptu DJ, but he dropped the ball. I was a little disappointed. I wondered if they didn't think that was a good enough win.''

Maybe they're just becoming the norm.

The Royals have won three straight and four of five to take over first place in the AL Central.

Junis (1-0) was charged with two runs on five hits and a walk while pitching into the sixth, but both his runs scored with reliever Jake Newberry on the mound. Kyle Zimmer also gave up a run before Barlow finished things off.

''Any time you're winning ballgames, it's always really fun in the clubhouse,'' Barlow said. ''The team looks really good, you know? Watching the hitters do their thing tonight was really fun. It's been fun to watch.''

Guerrero finished a triple shy of the cycle for the Blue Jays. The highlight for them was his two-out homer in the seventh that soared over the fountains in left field and landed an estimated 456 feet from home plate.

''I felt like I made a bunch of good pitches,'' he said. ''They were just finding holes, and sometimes that's just how it is.''

The Royals had been in an offensive slumber before breaking out against the Angels on Wednesday. A lineup built to drive the ball into the spacious gaps at Kauffman Stadium continued to pile up the extra-base hits Thursday night.

Andrew Benintendi began the scoring with an RBI double before Kay even got an out. Nicky Lopez continued with an RBI triple in the third - then scored on an error by third baseman Cavan Biggio. But the big blow to the Blue Jays came in the fifth, when four of the first six batters that Kansas City sent to the plate dropped doubles into the outfield.

Jorge Soler led off with the 100th double of his career. Hunter Dozier and Hanser Alberto followed with one-out doubles. And Whit Merrifield capped the four-run frame with a two-run double for a 7-0 lead.

Junis' streak of 14 scoreless innings to start the season finally ended in the sixth, when Newberry allowed both of the runners he inherited to score during what became a four-run inning for the Blue Jays.

Toronto got another back on Guerrero's home run before Barlow and the bullpen wrapped things up.

And the music finally got started in the Kansas City clubhouse.

''They picked it up as I was walking out of there,'' Matheny said with a wry smile. ''I don't know what they were playing. I don't know any of those songs.''

The Blue Jays put RHPs Ross Stripling (right flexor strain) and Jordan Romano (right ulnar neuritis) on the injured list before the game. Kay was recalled from the alternate training site along with RHP Joel Payamps, who pitched in relief.

''It was tightness,'' manager Charlie Montoyo said of Stripling, the fourth Blue Jays starter to land on the IL. ''We don't think it's that bad but it's not good enough for him to pitch in 10 days, we know that for sure.''

Blue Jays: Biggio left in the fifth with pain in his right hand. Joe Panik replaced him and hit a two-run double.

Royals: SS Adalberto Mondesi has ramped up his movement but there remains no timetable for his return, Matheny said. Mondesi has been on the injured list with a strained right oblique since the start of the season.

The Blue Jays will send out LHP Steven Matz (2-0, 1.46 ERA) against Royals LHP Mike Minor (1-0, 4.50) on Friday night unless rain forecasted to last most of the day washes things out. Minor is 4-0 in seven career appearances against Toronto.