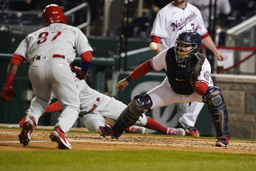 Washington Nationals catcher Alex Avila catches the throw from left fielder Kyle Schwarber before making the tag on Philadelphia Phillies' Odbel Herrera for the out during the fifth inning of a baseball game at Nationals Park, Wednesday, May 12, 2021, in Washington. (AP Photo/Alex Brandon) 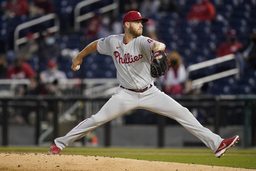 Philadelphia Phillies starting pitcher Zack Wheeler throws during the fourth inning of the team's baseball game against the Washington Nationals at Nationals Park, Wednesday, May 12, 2021, in Washington. (AP Photo/Alex Brandon) 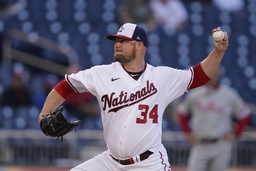 Washington Nationals starting pitcher Jon Lester throws during the first inning of the team's baseball game against the Philadelphia Phillies at Nationals Park, Wednesday, May 12, 2021, in Washington. (AP Photo/Alex Brandon)

WASHINGTON (AP) Rhys Hoskins hit a go-ahead single in the 10th inning as the Philadelphia Phillies rallied and then took the lead against struggling Washington closer Brad Hand, beating the Nationals 5-2 on Wednesday night.

Philadelphia, which has taken seven of its last nine, won consecutive road games for the first time this season. Washington dropped its fourth in a row and seventh of eight to sink a season-worst six games below .500. At 13-19, the Nationals are one game worse than at this point in 2019, when they won the World Series.

Hand (2-2), who blew a save Saturday against the New York Yankees and then suffered the loss the next afternoon in the Bronx, was staked to a 2-1 lead in the ninth. He quickly gave it back on Odubel Herrera's one-out home run. It was the first home run allowed by Hand since Sept. 4, 2019, a span of 37 appearances.

Herrera has back-to-back multihit nights for the first time this season and has raised his average from .053 to a season-high .229 since May 2.

''I was ready to see the ball and hit it, and he threw me a hanging breaking ball,'' Herrera said. ''I recognized it and put a good swing.''

Jose Alvarado (3-0) pitched a scoreless ninth, and Hector Neris worked a perfect 10th for his seventh save.

Tied 1-all in the sixth, Alex Avila lofted a fly to the warning track in right-center. Harper struggled to get his bearings tracking it while Herrera scampered over. The ball fell between the two outfielders, who then ran into each other in a belated attempt to salvage an out.

Washington fans, who have booed Harper at every opportunity since the 2015 NL MVP left the Nationals to sign a 13-year, $330 million deal with Philadelphia in 2019, savored the moment as Harper tumbled to the warning track and Avila wound up with a triple that scored Starlin Castro.

''One of us needed to take control right there and get that out,'' Harper said. ''(Zack) Wheeler doesn't deserve that the way he was pitching tonight, and I think as a team we weren't going to let him get that loss tonight with the way he was throwing. Definitely miscommunication out there. We need to be better, and that won't happen again.''

Castro went 4 for 5 to extend his hitting streak to 10 games.

Phillies: C J.T. Realmuto was out of the lineup a day after taking a foul ball off his left knee in the seventh inning and departing in the eighth. ''We just thought it was best that we give him today off,'' manager Joe Girardi said. ''He's day to day.'' . SS Didi Gregorius exited in the fifth with right elbow stiffness. Girardi said Gregorius could be out a couple days. . RHP Archie Bradley (left oblique strain) pitched a perfect inning Wednesday for Triple-A Lehigh Valley. He is expected to make another rehab appearance Saturday. . OF Roman Quinn (lacerated finger) has started hitting work and could be ready to get some at bats Friday.

Nationals: RHP Stephen Strasburg (shoulder inflammation) will throw a bullpen session Thursday, two days after a 62-pitch simulated game. Martinez said it is uncertain if Strasburg will make a rehab appearance at Triple-A Rochester or throw another simulated game this weekend. . Washington activated RHP Wander Suero from the injured list and optioned RHP Paolo Espino to Rochester. Espino is 0-1 with a 1.64 ERA in six games.

Washington OF Kyle Schwarber threw out Herrera at the plate to end the fifth. It was his 31st outfield assist since 2017, the most among left fielders in that span.

Phillies: RHP Zach Eflin (2-1, 3.38 ERA), who has pitched at least six innings in each of his seven starts this season, draws the start for Thursday's matinee.