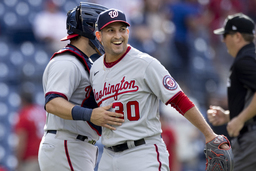 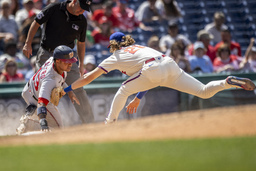 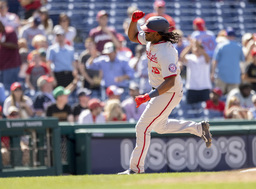 Washington Nationals' Josh Bell runs the bases after hitting a grand slam home run during the sixth inning of a baseball game against the Philadelphia Phillies, Wednesday, June 23, 2021, in Philadelphia. (AP Photo/Laurence Kesterson) 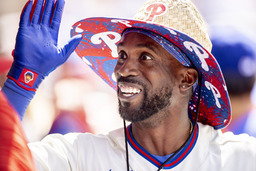 Philadelphia Phillies' Andrew McCutchen celebrates in the dugout after hitting a grand slam home run during the fifth inning of a baseball game against the Washington Nationals, Wednesday, June 23, 2021, in Philadelphia. (AP Photo/Laurence Kesterson) 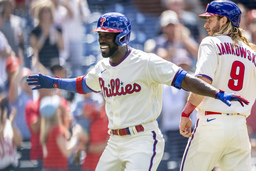 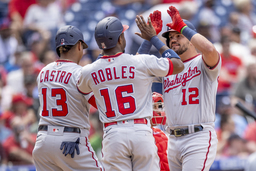 Washington Nationals' Kyle Schwarber (12) is congratulated by Starlin Castro (13) and Victor Robles (16) after hitting a three-run homer during the fifth inning of a baseball game against the Philadelphia Phillies, Wednesday, June 23, 2021, in Philadelphia. (AP Photo/Laurence Kesterson)

PHILADELPHIA (AP) A slugfest came down to a 34-year-old pitcher trying to shut down the middle of the order for his first career save.

No problem for Paolo Espino.

It was the first game in major league history that featured a grand slam and three-run homer for each team.

''Boom,'' Nationals manager Dave Martinez said. ''There's no way to sum it up.''

Josh Bell answered Andrew McCutchen's slam with one of his own as the Nationals overcame deficits of 5-0, 9-5 and 12-11.

Kyle Schwarber hit Washington's three-run homer and Travis Jankowski had one for Philadelphia. Bryce Harper also connected for the Phillies.

Girardi's biggest issue this time was trying to find a pitcher to hold any lead.

Meanwhile, Martinez had already used seven pitchers by the time he handed it over to Espino for his 30th career appearance. The Panama native retired Rhys Hoskins and Harper on two pitches. After J.T. Realmuto reached on an error, Brad Miller lined out.

''Espino is pretty much our secret weapon,'' Martinez said. ''He's the one guy I know will go out there and pump strikes.''

Espino has 21 strikeouts and only three walks in 28 2/3 innings.

''I've been blessed my entire career with good command,'' Espino said. ''I throw strikes, attack hitters. That's what I try to do.''

After Ronald Torreyes gave the Phillies a 12-11 lead in the bottom of the eighth with an RBI single, Neris allowed consecutive singles to Bell and Josh Harrison to start the ninth and Alex Avila's sacrifice moved the runners.

Castro then lined a single to center to put Washington ahead to stay as Neris (1-4) blew his fifth save in 15 tries.

''I was ready for the fastball and I hit it the other way,'' Castro said.

Tanner Rainey (1-2) got the last two outs in the eighth.

The Phillies jumped on Nationals starter Erick Fedde, who had thrown 21 consecutive scoreless innings before Jankowski crushed his first homer since Sept. 26, 2018, in the second.

But Philadelphia's Vince Velasquez, who retired the first 10 batters before Trea Turner lined a double with one out in the fourth, couldn't get past the fifth.

The Nationals scored five off Velasquez and Archie Bradley in the fifth and six more off Sam Coonrod and David Hale in the sixth..

Schwarber, who struck out his first two at-bats, smashed an 0-1 pitch off Bradley the opposite way for his 19th homer and 10th in 12 games.

Coonrod walked the bases loaded and struck out two batters before giving way to Hale. Trea Turner hit a two-run single to cut it to 9-7. After Juan Soto walked to load the bases again, Bell blasted one the opposite way to left-center for an 11-9 lead.

''We had leads and we gave them away by issuing so many bases on balls and you can't do that,'' Girardi said. ''We have to be better.''

Jankowski was 3 for 4 with a walk, falling a triple short of the cycle. The long-haired lefty circled the bases in the second and put on the Phillies straw hat worn in the dugout by players who hit homers.

All 10 of Harper's homers have been solo shots, tying the team record for most home runs with nobody on base to start the season. Fred Luderus previously did it in 1914. Felipe Alou's 17 solo homers to start the season in 1966 is a major league record.

Phillies: McCutchen wasn't in the starting lineup because of knee soreness but entered as a pinch-hitter in the fifth.