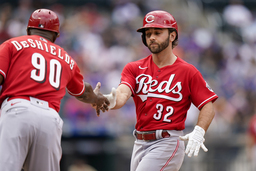 Cincinnati Reds' Max Schrock (32) celebrates with first base coach Delino DeShields (90) after hitting a single during the seventh inning of a baseball game against the New York Mets, Sunday, Aug. 1, 2021, in New York. (AP Photo/Corey Sipkin) 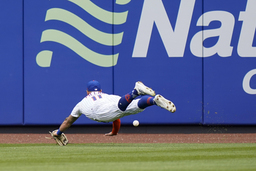 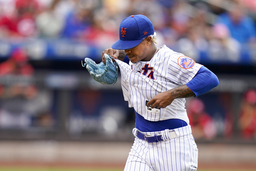 New York Mets starting pitcher Marcus Stroman walks to the dugout after being pulled during the sixth inning of a baseball game against the Cincinnati Reds, Sunday, Aug. 1, 2021, in New York. (AP Photo/Corey Sipkin) 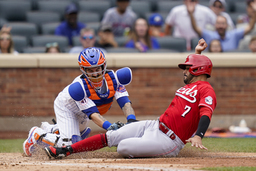 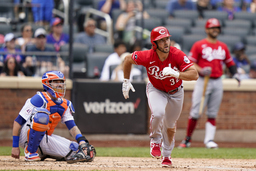 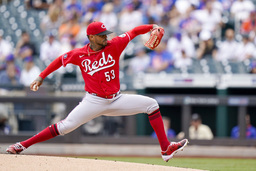 Schrock went 5 for 5 with a home run while giving the All-Star a break, leading fellow newcomer Vladimir Gutierrez and Cincinnati over the New York Mets 7-1 Sunday.

Making his first major league start at first base, the 26-year-old Schrock - who's also made a relief pitching appearance this year - filled in admirably for the Reds star. Schrock scored three runs and drove in two.

''I was just going up there trying to see good pitches, that was about it,'' Schrock said.

Votto got a rest from manager David Bell a day after his seven-game home run streak came to an end. That allowed the 37-year old slugger to have consecutive off days before the Reds' series opener with Minnesota on Tuesday.

''It worked out perfectly,'' Bell said.

Tyler Stephenson and Kyle Farmer each drove in runs for the Reds, who matched a season high by moving six games over .500.

''Maybe I should go play first on Tuesday,'' Farmer joked. ''Anybody who is playing first is just killing it!''

In his second game with his new team, Javier Baez went hitless in four at-bats for the NL East-leading Mets, who are 8-9 since the All-Star break.

Gutierrez (6-3) allowed three hits in seven innings. His only blemish was a sixth-inning home run to Jeff McNeil.

''I'm glad that I am with this ball club right now and given the opportunity to get this team to win games,'' Gutierrez said through an interpreter.

The rookie right-hander struck out four and didn't allow a hit until Kevin Pillar's two-out single in the fifth. Gutierrez also drew a bases-loaded walk in the sixth for his first major league RBI.

Marcus Stroman (7-10) gave up Schrock's solo homer in the fourth, then ran into trouble in the sixth.

Jesse Winker hit a leadoff double and Farmer tripled to center field, just beyond the reach of a diving Pillar. Stephenson followed with a sacrifice fly.

Stroman appeared to wiggle out of trouble before walking Tyler Naquin on a wild pitch that allowed Schrock, who had singled, to reach third. Miguel Castro relieved and walked consecutive hitters to force in a run.

After becoming the 30th New York Mets player to home in his first game with the team on Saturday, Baez showed off his arm Sunday. The All-Star shortstop nabbed Eugenio Suarez at the plate with a perfect throw from the outfield grass in the fourth inning.

Reds: Bell was asked pregame if he would have held out Votto if the star slugger's eighth-inning drive Saturday night that hit off the padding atop the right-field wall was a foot higher. The Cincinnati skipper gave a hearty laugh before ending his pregame news conference without commenting. Votto fell one game - and just a few inches - shy of matching the MLB record of home runs in eight straight games.

Mets: OF Brandon Nimmo (hamstring) was held out of the starting lineup for the second straight game. He popped out as a pinch-hitter in the sixth . INF Luis Guillorme was placed on the 10-day injured list with a left hamstring strain.

Mets: Rookie RHP Tylor Megill (1-0, 2.04 ERA) will be on the mound as New York opens a four-game series at Miami on Monday. Megill's 1.04 ERA in July was the best in the major leagues for pitchers who threw at least 25 innings. ---