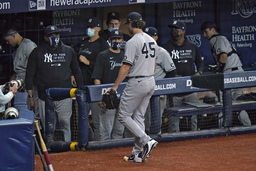 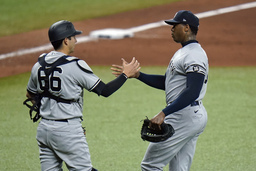 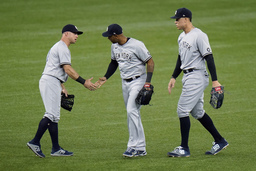 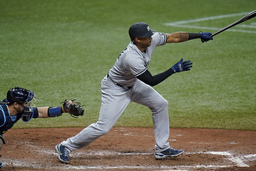 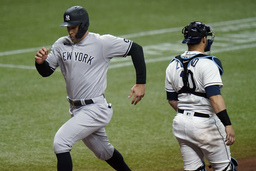 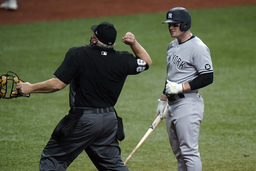 New York Yankees' Clint Frazier, right, gets thrown out of the game by home plate umpire Bill Miller after Frazier struck out against Tampa Bay Rays pitcher Ryan Yarbrough during the fifth inning of a baseball game Wednesday, May 12, 2021, in St. Petersburg, Fla. (AP Photo/Chris O'Meara)

Cole (5-1) scattered four hits and has five starts this season of at least 10 strikeouts and no walks to break Mike Mussina's single-season team record set in 2001. He struck out all three batters in his final inning, including Brett Phillips on a 98 mph fastball to end the inning.

''He's so good and so much fun to watch,'' New York manager Aaron Boone said. ''It was just a lot of fun to watch him operate tonight, and really dominate. He's an ace. He's a bulldog.''

Aroldis Chapman completed the four-hitter to get his ninth save as New York won consecutive games, including postseason, against the Rays for the first time since July 16-18, 2019.

COVID-19 protocols impacted the Yankees for the second straight day. Torres was kept out of the starting lineup as a precaution as the number of confirmed positive COVID-19 tests among the team's coach and support staff reached seven.

Boone had no update on Torres' status after the game.

''Anytime we get to play right now it's like a nice release,'' Cole said. ''It's the only thing we have to focus on is playing. We've got to focus on winning the game, so we take our minds off everything that's happened over the past few days and get to take a break from it.''

Six of the seven are asymptomatic. All are fully vaccinated, which Boone said was blunting the effects of the virus.

Cole has struck out 56 since his last walk on Apr. 12, tying Curt Schilling from May to June 2002 for the longest such streak in a season since at least 1961, according to the Elias Sports Bureau.

''The guy is super,'' Rays manager Kevin Cash said. ''He was probably, tonight, above and beyond. He had everything working the way he wanted.''

Cole had been 0-4 in eight previous regular-season starts against the Rays. However, he is 3-0 in four playoff outings.

It was the Yankees' first 1-0 win since Masahiro Tanaka and Chapman combined on a four-hitter on Aug. 11, 2019 at Toronto.

Cole has not given up a walk and gone at least six innings in each of his last five starts, which ties Fritz Peterson (1971) for the second-longest such stretch in Yankees history. Only David Wells' six-game streak from Sept. 6, 2002 to Apr. 10, 2003 is longer.

The right-hander, who has walked just three batters this year, has allowed two or fewer earned runs in 12 straight starts, the longest stretch by a Yankees starter excluding openers since Whitey Ford's 12-game run in 1963.

Jeffrey Springs replaced Ryan Thompson (2-2) with runners on second and third with one out in the seventh and gave up Hicks' sacrifice fly.

Yankees left fielder Clint Frazier was ejected by plate umpire Bill Miller in the fifth for arguing after taking a called third strike.

Tampa Bay dropped to 7-12 at home this year. The Rays have scored one or fewer runs nine times overall.

Tampa Bay's Austin Meadows had a strange double in the first inning when he hit a towering fly to right off Cole that struck an overhanging catwalk and landed back toward the infield.

Rays: 1B Ji-Man Choi (right knee arthroscopic surgery) rejoined the team from a rehab assignment at Triple-A Durham as planned but is experiencing soreness. ''I think this is just a minor thing and that there's a chance he's activated soon,'' Cash said. ''If it doesn't go away then we'll have to revisit.'' ... Closer Diego Castillo (right groin tightness) could return on Friday.