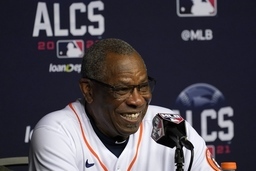 Houston Astros manager Dusty Baker smiles as he responds to questions during a baseball news conference in Houston, Thursday, Oct. 14, 2021. The Astros host the Boston Red Sox in Game 1 of the American League Championship Series on Friday. (AP Photo/Tony Gutierrez) 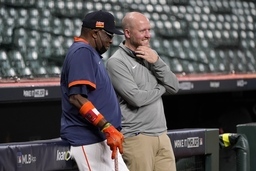 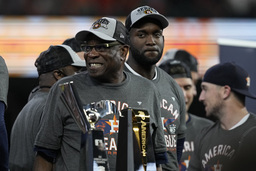 Houston Astros manager Dusty Baker Jr. stands by the trophy after their win against the Boston Red Sox in Game 6 of baseball's American League Championship Series Friday, Oct. 22, 2021, in Houston. The Astros won 5-0, to win the ALCS series in game six.(AP Photo/Tony Gutierrez) 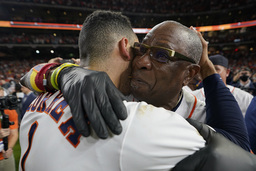 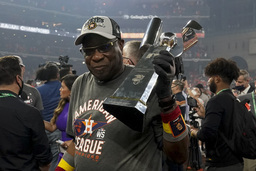 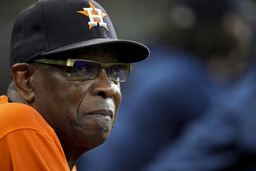 HOUSTON (AP) Dusty Baker, then manager of the San Francisco Giants, had just left the stadium after a crushing loss to the Anaheim Angels in Game 7 of the 2002 World Series when he met up with his father.

''He goes: `Man, after the way (you) lost that one I don't know if you'll ever win another one,'' Baker recalled Sunday.

Nineteen years after that conversation and more than a decade since his dad's passing, Baker finally has a chance to prove wrong the father he loved so dearly.

He'll get the opportunity starting Tuesday night when he leads the Houston Astros against the Atlanta Braves in the World Series.

The 72-year-old Baker has thought of that conversation often over the years. And since the Astros dispatched the Red Sox to reach their third Fall Classic in five years Friday night, his father's words have grown even louder in his head.

''So that's been my motivation,'' Baker said.

This is Baker's second trip to the Series as a manager. As a player, he went three times with the Dodgers, winning it all as a big-hitting left fielder in 1981.

In an illustrious career as a star player and manager spanning more than 50 years, winning a World Series as a manager is virtually the only box left open for Baker.

Added Hall of Famer Reggie Jackson, the original Mr. October who now works as a special adviser to Astros owner Jim Crane: ''I do think it would make a wonderful addition to his resume.''

Houston star shortstop Carlos Correa, who becomes a free agent at season's end, is intent on helping Baker add this accomplishment to the back of his baseball card.

It's been a whirlwind two years for Baker, who after being fired by the Nationals following a 97-win season in 2017 wondered if he'd ever even get another shot to manage, much less win that elusive title.

Back home in Northern California, as he worked on his wine business and grow collard greens in his garden, he often felt perplexed he had been passed over for interviews so many times as managerial openings came and went, having made inquiries that he said were unanswered over the years.

Baker figured his age and salary at this stage of his life might be enough to turn off many prospective general managers and front offices.

It was during this time that his father's words rang in his ears.

''I thought about it the whole time when I didn't know if I'd get back to this business,'' he said.

Then came January 2019 and the stunning revelation that the Astros had illicitly stolen signs in their run to the 2017 World Series championship and again in 2018. The cheating scandal cost manager A.J. Hinch his job, leaving a team with an almost unfathomable image problem in need of a strong leader.

Crane found that leader in Baker, a man who now ranks 12th all-time in managerial wins and has taken five teams to the playoffs. In last year's COVID-19-shortened season, the Astros squeaked into the postseason as a wild-card team before heating up in playoffs to come one win shy of reaching the World Series.

''The first time I met him, we talked for almost two hours, and I knew he was the right guy immediately,'' Crane said. ''Nothing bothered him because he had been through so much.''

And this week his path comes full circle as he meets the team that drafted him out of high school in 1967 and where he spent the first eight seasons of a 19-year playing career.

It was with the Braves that he got his first major league hit a few miles from Minute Maid Park in the now-defunct Astrodome as a 19-year-old on Sept. 17, 1968, with ''a little dribbler off Mike Cuellar.''

But perhaps most importantly it was where he began a lifelong friendship with the great Hank Aaron, who died in January at 86. It was Aaron who convinced Baker to sign with the Braves instead of pursuing a college basketball career.

Baker was on deck and among the Braves congregated at the plate to celebrate with Aaron on April 8, 1974, when he hit his 715th home run to pass Babe Ruth for most all-time.

But there's no one Baker revels in talking about more than Hammerin' Hank.

Aaron took Baker under his wing, reiterating many of the lessons Baker's father had shared with him like the value of honesty and helping others. But he also provided a guidebook for navigating the Deep South as a Black man in the 1960s. It was a lesson Baker needed having grown up California.

''Just life and being a proud African American, but not wearing that on your sleeve because it's already on your face,'' Baker said.

Baker finds it fitting that he'll return to Atlanta with the baseball world watching and looks forward to seeing Aaron's wife and kids on the trip.

''It is very special to go back to Atlanta,'' he said. ''This is going to be a storybook ending really for all of us.''

The Astros are baseball's villains, jeered at every stadium for their cheating and hated by most outside of Houston. But Baker is so universally liked around the game, that some are begrudgingly cheering for the Astros this week simply because of the veteran manager.

Brandon Phillips, a retired three-time All-Star second baseman, who played for Baker for six seasons in Cincinnati, is certainly one of those people. He's thrilled to see the man he considered a father figure get another chance because he was worried it might never come.

He knows the cheating scandal will always be part of the Astros story, but believes Baker helped repair some of the wounds on the franchise.

''Dusty was the right guy for this job because he'll change your mindset from the negative and make it positive,'' Phillips said. ''That (scandal) will never be forgotten, but all you can do is go by the now and see they are where they are now because they're a great team and Dusty is the glue.''

Baker's wife, Melissa, and son, Darren, who just played his first season of pro ball in the Nationals system, attended the ALCS games and now are together in Houston to be part of this special time.

''I was talking to my dad about it more the next morning and just putting everything into perspective, it's like a movie,'' Darren Baker said by phone Sunday. ''It's unbelievable. And then Hank Aaron and playing the Braves, it's pretty crazy.''

The younger Baker made headlines in his dad's last World Series trip when the 3-year-old was serving as a bat boy and had to be snatched from home plate by J.T. Snow to avoid being hit by David Bell.

Family is everything to Baker, who added ''Jr.'' to his jersey before last season as a nod to his beloved father. As he sat in the dugout Sunday long after all the players had finished their work, he was asked if he thinks his dad will be looking down on him as he returns to the World Series with the tribute to him emblazoned on a back that's been through so much in more than a half-century in the game.

And what will the taskmaster so strict that he once kicked his son off a Little League team for having a bad attitude think when he sees him under the bright lights of baseball's biggest stage once again?

''That's pretty good,'' Baker said. ''He told me that all the time, but you've got to understand that pretty good meant great to my dad.''