Giants overcome Ohtani, rally in 13th for 9-3 win over Halos 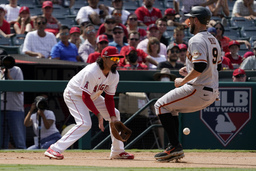 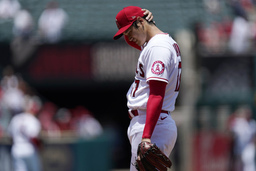 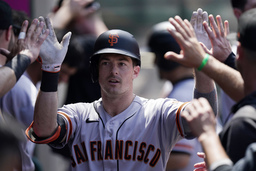 San Francisco Giants' Mike Yastrzemski is congratulated by teammates in the dugout after hitting a solo home run during the fifth inning of a baseball game against the Los Angeles Angels Wednesday, June 23, 2021, in Anaheim, Calif. (AP Photo/Mark J. Terrill) 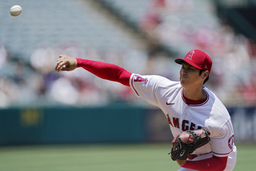 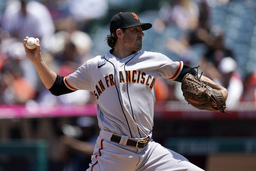 ANAHEIM, Calif. (AP) By the time the San Francisco Giants got back to the clubhouse from a 13-inning marathon against the Los Angeles Angels, they were looking at starting pitcher Kevin Gausman a bit funny.

''Did you pitch in this game?'' manager Gabe Kapler jokingly asked him.

Gausman did pitch against Shohei Ohtani, and they were both really good. But long after that compelling mound showdown, the Giants finally got the breaks they needed to break through in this nearly five-hour endurance contest against the Los Angeles Angels.

Ohtani struck out nine over six innings of one-run ball, but the major league-leading Giants rallied for seven runs in the 13th and a 9-3 victory over Los Angeles on Wednesday, sweeping the two-game interleague series.

The ramshackle ending included 10 combined runs in the final two innings, premature celebratory fireworks at Angel Stadium and a left fielder playing catcher while a pitcher played left field for the Halos.

None of it reflected the high-level starting performances: Gausman yielded four hits with nine strikeouts over seven strong innings, trading zeros with Ohtani and lasting an inning longer. Both starters gave up runs only on a pair of solo homers in the fifth.

''Obviously a pitchers' duel for the majority of the game, and our bullpen really pitched well down the stretch,'' Gausman said. ''I got done everything I needed to get done (for arm recovery) long ago. I was definitely sitting around watching the guys. I was getting ready to go back in the dugout, but then the guys put it away.''

Ohtani threw a season-high 105 pitches, his most since undergoing Tommy John surgery in 2018. Mike Yastrzemski's homer in the fifth accounted for San Francisco's only run off Ohtani, who issued just one walk and induced 21 swings and misses - the second-most in his major league career, according to Statcast.

''It was really hot out there, but I managed to fight through it and got my six innings in,'' Ohtani said through his translator. ''At the beginning of the game, my body felt heavy. It was hard to move around. That's probably why the (velocity) wasn't there. As the game went on, I felt better and better, and I think the (velocity) went up.''

Ohtani began the day tied for the major league lead in homers but went 0 for 3 with two strikeouts against Gausman.

''Obviously he's a great pitcher, and his splitter was moving in a way I haven't really seen recently,'' Ohtani said. ''He got the best of us.''

Steven Duggar had an RBI double in the 12th and a two-run single in the 13th for the Giants, who finally blew it open while the Angels had outfielder Taylor Ward playing catcher and right-hander Griffin Canning playing left field as the fallout from an untimely injury to Kurt Suzuki.

Mike Tauchman struck out five times before hitting a three-run homer to cap the 13th-inning rally by the Giants, who have won eight of nine.

''It was just one of those games, man,'' Angels manager Joe Maddon said. ''You could win it so many ways, and you don't, and that's what's frustrating.''

Alex Claudio (1-2) walked three straight in the 13th for the Angels, who lost their third straight.

Dominic Leone (1-0) won despite yielding the tying run in the 12th.

TOO MUCH OF A GOOD THING

The 13-inning game matched the longest in the majors since the institution of the runner-on-second-base rule to open extra innings last season. The Giants hadn't scored seven runs in an extra inning since May 30, 1940, when they put up eight in the 12th against the Dodgers.

The Angels thought they won in the 12th: Shortly after Juan Lagares tied it with an RBI single, he was called safe at the plate when he ran home on Luis Rengifo's grounder.

But the umpires reversed their call on video review shortly after the Big A set off its celebratory fireworks, ruling Buster Posey barely applied the tag in time.

''I didn't think there was anything conclusive to overturn it,'' Maddon said. ''That simple. I thought it would stand, because that's why the call on the field is so important. I don't know exactly who, or why they chose to do that. I'm certain if I started complaining a bit, it's not really going to matter. It's just part of this system that needs to be improved upon.''

Maddon let Ohtani hit even though Justin Upton was sidelined by a back injury. That left Los Angeles with two reserve position players: utilityman Phil Gosselin and catcher Max Stassi, who both pinch-hit before the 12th.

When Suzuki was injured by a foul ball, the Angels turned to Ward, who performed well at the position he played early in his baseball career. No balls went to Canning in left.

Giants: Brandon Belt left with a right knee injury in the eighth after he attempted to score the tiebreaking run from third. He'll be evaluated in San Francisco, Kapler said. ... INF Wilmer Flores was out of the starting lineup after leaving Tuesday's game early with hamstring tightness.

Angels: Upton's lower back tightness isn't thought to be serious, Maddon said. ... Maddon had no details on Suzuki's injury.

Giants: Johnny Cueto (5-3, 4.05 ERA) is the likely starter against Oakland on Friday when the Bay Bridge Series resumes at Oracle Park.