Indians' Civale to miss at least month with finger sprain 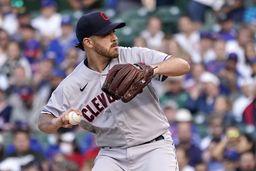 Civale, who is tied for the major league lead with 10 wins, injured his middle finger in a start against the Chicago Cubs on Monday. He underwent an MRI and was examined by Dr. Thomas Graham in Dayton, Ohio, on Wednesday.

The Indians said Civale will be shut down from throwing for up to two weeks and the right-hander will miss between four to five weeks of game activity.

Despite being without his top two pitchers, manager Terry Francona has pieced together enough quality starts from others to keep the Indians competitive and playing beyond expectations. Cleveland only trails the Central-leading Chicago White Sox by 2 1/2 games entering Wednesday's action.

Cleveland opens a four-game series in Minnesota on Thursday.