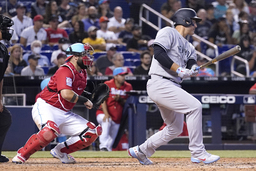 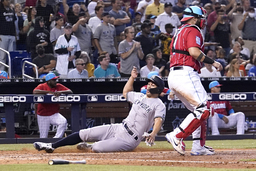 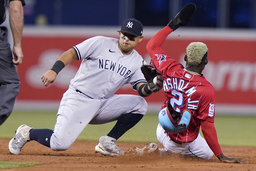 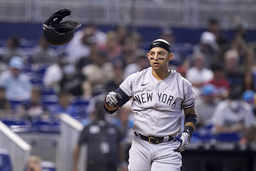 New York Yankees' Rougned Odor tosses his helmet after he struck out swinging during the fourth inning of a baseball game Miami Marlins, Sunday, Aug. 1, 2021, in Miami. (AP Photo/Lynne Sladky) 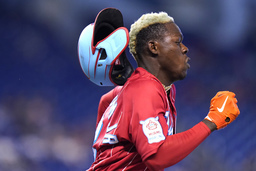 Miami Marlins' Jazz Chisholm loses his helmet as he runs to first base with a single during the first inning of a baseball game against the New York Yankees, Sunday, Aug. 1, 2021, in Miami. (AP Photo/Lynne Sladky) 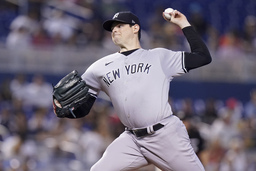 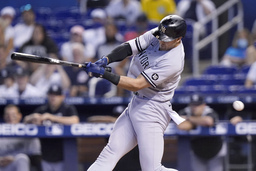 MIAMI (AP) Anthony Rizzo continued his remarkable debut for the Yankees with another key hit and New York completed a three-game sweep with a 3-1 victory over the Miami Marlins on Sunday.

The partisan New York crowd in Miami finally got to cheer when the Yankees had an eighth-inning rally highlighted by RBI singles from Rizzo and Aaron Judge.

Rizzo, who went to high school in the Miami area, singled home Brett Gardner for the game-tying run in his third game with the Yankees. The first baseman was acquired in a trade from the Chicago Cubs at the trade deadline and hit a homer in each of his first two games with New York before Sunday's clutch at-bat.

''You talk to anyone around the league and they'll tell you (Rizzo) is one of those really special elite players,'' Yankees manager Aaron Boone said. ''That is just a part of his make-up as a great ballplayer.''

Giancarlo Stanton, who had reached on a throwing error by third baseman Brian Anderson, then raced home with the go-ahead run on Judge's sharp single.

Joely Rodriguez (2-3), who came over from the Texas Rangers in the Joey Gallo deal, needed only one pitch to earn his first win in his first outing with his new team. Anthony Bass (1-6) took the loss.

Aroldis Chapman retired the side in the bottom of the ninth for his 22nd save.

Gardner, who started the late comeback with a single up the middle, noted that the clubhouse is already very aware of what Rizzo brings to the team.

''We know what he's capable of doing and the approach he takes every at-bat,'' Gardner said. ''Just the energy he brings to the ballpark every day ... It's great to have him on our side. He keeps coming up big for us.''

The comeback spoiled one of the better outings this season by Marlins' ace Sandy Alcantara, who was moved up a day after he was originally scheduled to start Monday's game against the Mets.

Alcantara retired nine of the first 10 batters he faced, with the only blemish a walk to Tyler Wade. In seven innings, he gave up just two hits -- a single to right by Judge in the fourth and a double by Gallo in the seventh.

''He's about as tough as you're going to face,'' Boone said. ''That pitching staff is so good and (Alcantara is) a big part of that.''

Gallo was on third base with two outs in the seventh when Alcantara got Torres to ground out to complete his outing. He retired 21 of the 24 batters he faced and matched his season-high in strikeouts with 10. He walked one.

Despite the continued lack of offensive support during his starts, Alcantara is determined to stay focused and perform his job on the mound.

Yankees starter Jordan Montgomery, who entered the game on a career-high 14 2/3 scoreless inning streak, saw that come to a quick end when Miami jumped out to a 1-0 first-inning advantage.

Miguel Rojas lined a lead-off double to left-center and advanced to third on Chisholm's infield hit, Brian Anderson came through with an RBI groundout.

Montgomery has allowed three runs or less in each of his last eight starts. The left-hander pitched five innings, giving up one run on three hits and a walk. He struck out five.

Miami OF Bryan De La Cruz, acquired from the Houston Astros for closer Yimi Garcia at the trade deadline, singled to center in the fifth inning for his first MLB hit.

A 24-year-old from the Dominican Republic, De La Cruz had a .324 batting average with 88 hits for Triple-A Sugar Land prior to the trade.

After a great first two days in pinstripes, Rizzo was charged with his first error when Chisholm Jr.`s harmless pop-up in the third inning landed between Rizzo and shifted shortstop Gleyber Torres. Rizzo appeared to back away from the apparent easy catch after Torres made a sudden move toward the play.

A high school shortstop from Wake Forest, N.C. the 18-year-old Watson will report to Miami's Single-A affiliate in Jupiter, Florida, with Miami's other 20 signees to begin initial workouts.

LHP Andrew Heaney (6-7, 5.27), acquired from the Angels at the trade deadline, makes his first start for the Yankees as they open a seven-game homestand against the Baltimore Orioles.

The Marlins, who open a three-game series against the Mets, are undecided on Monday's starter.