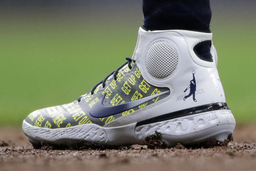 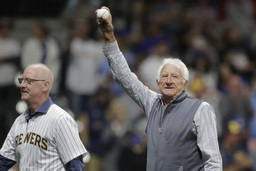 Broadcaster Bob Uecker, right, waves to the crowd after throwing out the ceremonial first pitch before a baseball game between the Milwaukee Brewers and the New York Mets Saturday, Sept. 25, 2021, in Milwaukee. (AP Photo/Aaron Gash)

At least the ones Uecker said he could share with an audience of family, friends, former players and team employees that spanned generations.

Uecker, a Milwaukee native affectionately known as ''Mr. Baseball,'' was honored Saturday with Bob Uecker Day in the city of Milwaukee and state of Wisconsin.

Uecker also ''threw'' out the first pitch, at the last minute pulling the cover off a pitching machine in front of the mound.

Joining Uecker on the dais at the ceremony before Saturday's game against the New York Mets were former Brewers owner and MLB commissioner Bud Selig, who gave Uecker his first broadcasting job with the team; current owner Mark Attanasio; and former Brewers players Robin Yount and Paul Molitor, each in the Hall of Fame.

Milwaukee Mayor Tom Barrett and Wisconsin Gov. Tony Evers also spoke at the event and presented Uecker with a proclamation.

Uecker, now 87, joined the Brewers broadcast team in 1971 after a six-year career as a catcher with the hometown Milwaukee Braves, St. Louis Cardinals, Philadelphia Phillies and Atlanta Braves that included a World Series championship with the Cardinals in 1964 and a .200 career batting average.

His post-playing career also included numerous appearances on ''The Tonight Show'' with the late Johnny Carson, who dubbed Uecker ''Mr. Baseball''; acting in the TV sitcom ''Mr. Belvedere''; the iconic humorous Miller Lite beer commercials of the '80s, including Uecker's now-famous line, ''I must be in the front row''; and as hilarious announcer Harry Doyle in the movie ''Major League.''

Uecker said he never had a formal contract with the team under Selig, which continued with Attanasio.

Selig was talking about how he had first hired Uecker and said, ''here we are 50 years later,'' when Uecker interrupted with, ''And I'm still waiting to get paid.''

In addition to family and friends, former Brewers manager Ron Roenicke and ex-general manager Doug Melvin were on hand.

Yount, who spent his entire 20-year career with the Brewers, and Molitor, who played the first 15 of his 21 years in the majors with Milwaukee, each talked fondly of the many years when Uecker still threw batting practice.

''He threw batting practice for the longest time and, not jokingly, was probably the best batting practice pitcher we had for many, many years,'' said Yount, the opening day starter at shortstop in 1974 as an 18-year-old rookie.

Molitor also talked about Uecker's relationship with the players, from their days in the clubhouse to the current team.

''It's a little bit embarrassing, honestly, to say that I've known him since I was a teenager, because when I met him, I was 18. He was a little more than that, but he hadn't reached teenaged mentality yet,'' Yount joked, although the affection was obvious.

Brewers manager Craig Counsell, who grew up in the Milwaukee area listening to Uecker's broadcasts, said he cherishes his relationship with the announcer, who he calls a close friend.

''When you spend a lot of time with Uke, you really wish that you wrote everything down,'' Counsell said.

When it was his turn to speak, Uecker had the audience laughing with stories as only he can tell them. He said he loves what he does and has no plans to retire, although he'll know when it's time and he would not embarrass himself or the organization.