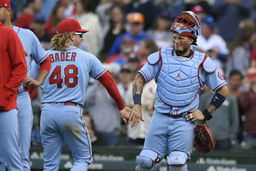 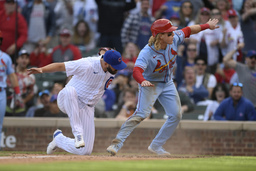 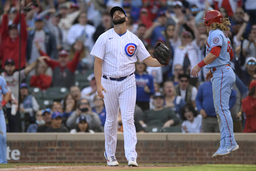 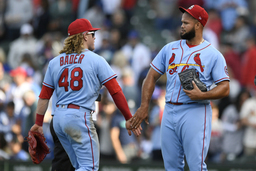 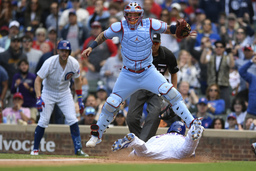 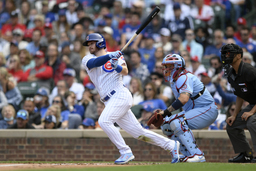 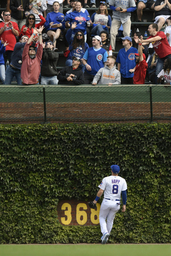 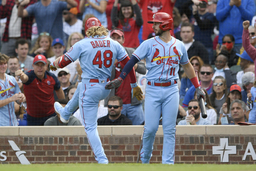 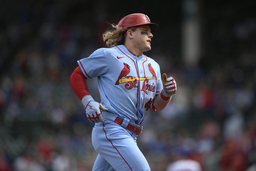 St. Louis Cardinals' Harrison Bader rounds third base after hitting a solo home run during the second inning of a baseball game against the Chicago Cubs Saturday, Sept. 25, 2021, in Chicago. (AP Photo/Paul Beaty) 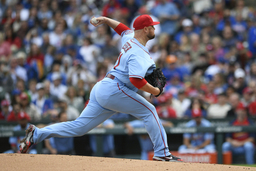 CHICAGO (AP) Harrison Bader and the St. Louis Cardinals clearly recognize their record is impressive. Now they also want to win their next game - and many more after that.

The Cardinals set a franchise mark with their 15th straight win, boosted when catcher Yadier Molina and center fielder Bader helped pull off a wild double play Saturday in an 8-5 win over the Chicago Cubs.

''It's hard to do something in this organization that's never been done,'' manager Mike Shildt said.

The Cardinals date their history to 1892, when they were known as the Browns and joined the National League. They later were called the Perfectos before becoming the Cardinals in the early 20th century.

Bader, Tyler O'Neill and Paul DeJong homered as these Cardinals broke the team record of 14 wins in a row set in 1935, a year after Dizzy Dean and the Gas House Gang won the World Series. Dean was among five Hall of Famers on that club.

''My perspective is what time is the game tomorrow?'' Bader said. ''It's great, don't get me wrong. It's part of history. There's tremendous talent that's come through. . But we have bigger things we're focused on. We have more games to win. We're going to take this energy as deep as we can.''

Bader went 4 for 4 and scored three times as the Cardinals held their comfortable lead for the second NL wild-card spot, five games ahead of Philadelphia.

And in a charmed final month, St. Louis preserved a late lead with a crazy play that resulted in a pair of rundowns and two outs.

After Nolan Arenado doubled to spark a three-run rally in the seventh, the Cardinals took a 5-4 lead into the eighth at Wrigley Field.

The Cubs quickly threatened when David Bote led off with a triple and Trayce Thompson walked. One out later, with runners still at the corners, Rafael Ortega hit a grounder to first baseman Paul Goldschmidt, who threw home to Molina.

After a short rundown, Arenado tagged out Bote. The star third baseman then cut across the diamond to trap Ortega off first. Another rundown ensued, with Molina catching a throw between second and third base before tossing to Bader, who had alertly rushed in join the play and led to Thompson being tagged, too.

Cardinals reliever T.J. McFarland said he was hoping for a groundball out after throwing a sinker.

''When that all unfolded, I can't explain it,'' said McFarland, who pumped his fist and yelled after the play. ''I'm glad the focus was on everyone else on the field because I'm pretty sure I was spinning around in circles on the field.''

The official scoring read like a phone number -- 3-2-5-4-2-8-6 -- it was the fourth double play of the afternoon for the dialed-in Cards, and kept them ahead by a run.

DeJong hit a two-run drive in the ninth. Ian Happ homered in the bottom half.

Far back in the playoff race heading into September, St. Louis moved closer to clinching a spot by extending its extraordinary streak.

Happ drove in three runs for the Cubs, who have lost five straight and nine of 10. The loss snapped Chicago's streak of seven consecutive winning seasons at Wrigley.

Down 4-2 in the seventh, the Cardinals rallied after Codi Heuer (7-3) replaced starter Adrian Sampson. Arenado led off with a double and Bader hit an RBI single, pointing toward the dugout as he headed to first.

Bader slid under the tag to score on a wild pitch on a strikeout in the ninth before DeJong homered.

Kwang Hyun Kim (7-7) pitched a scoreless inning for the win.

Cardinals lefty Jon Lester allowed three earned runs in five innings in his first start against his former team since he was traded to St. Louis in July. He went 77-44 with a 3.64 ERA with the Cubs from 2015-20, helping lead them to the 2016 World Series championship. Fans greeted him with applause, and Chicago manager and former catcher Ross ate dinner with him earlier in the week.

''Today obviously wasn't ideal,'' Lester said. ''You got to figure out a way to make it work. We were able to do that for the most part. It seems like right now, I keep talking about it, if you keep this team within striking distance, you've got a chance.''

In his last start, Lester earned his 200th career win Monday at Milwaukee. The Cubs honored his milestone on the videoboard Friday.

Lester began the season with Washington, and he lost May 17 in his return to Wrigley Field. He was 2-1 with a 6.50 ERA in three previous career starts against Chicago.

Bader homered in the second inning for his second drive in as many games.

O'Neill tied the game with a solo shot in the fourth. It was his 32nd homer this season and third in three games. His 11 homers in September lead the majors.

The Cubs retook the lead with a pair of runs in the fourth. An error by Arenado error loaded the bases before Willson Contreras singled in a run.

Lester then walked Happ for a 4-2 Cubs lead. It was the Cardinals' 29th bases-loaded walk, setting the modern-day record since 1974 and passing the 1999 Seattle Mariners.

Cardinals: RHP Justin Miller (right elbow strain) went on the 10-day injured list. RHP Jake Woodford was recalled from Triple-A Memphis to take his spot. Woodford was optioned to Memphis after Friday's doubleheader. . SS Edmundo Sosa (right hand/wrist) was out of the lineup after he was hit by a pitch Friday. He is expected to miss up to five games, Shildt said.