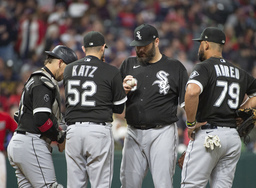 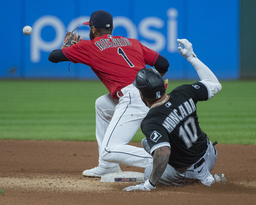 Chicago White Sox's Yoan Moncada slides safely into second base with a double as Cleveland Indians' Amed Rosario waits for the throw during the fifth inning of a baseball game in Cleveland, Saturday, Sept. 25, 2021. (AP Photo/Phil Long) 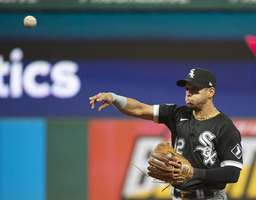 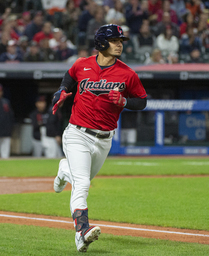 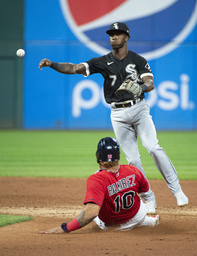 Chicago White Sox's Tim Anderson forces Cleveland Indians' Harold Ramirez at second base and completes a double play by throwing Austin Hedges out at first during the second inning of a baseball game in Cleveland, Saturday, Sept. 25, 2021. (AP Photo/Phil Long) 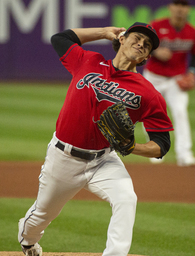 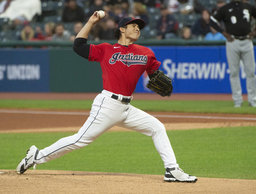 Chicago remained four games behind AL West leader Houston in the race for home-field advantage in the Division Series. Both teams have seven games remaining.

Morgan (4-7) struck out six and walked one, giving up only a double to Yoan Moncada in the fifth. The rookie right-hander limited the Yankees to one run over six innings in winning his previous start against ace Gerrit Cole.

''My fastball command has been key,'' Morgan said. ''If I can go in and establish it down early, it makes the changeup more effective. I was aware I hadn't allowed a hit through four and (a no-hitter) would have been cool to do, but I wasn't too worried about it.''

Ramirez hit a two-run homer and had an RBI single off Lance Lynn (10-6), whose winless streak reached nine starts. The All-Star gave up six runs in six innings, striking out six without a walk, and has not won since July 25.

Lynn was examined by a trainer after completing his warmup pitches in the fifth, but remained in the game and allowed four straight hits and three runs in the sixth. The righty made his third start since returning from a sore right knee.

''My back felt weird for a second, but it's fine,'' Lynn said. ''We're all just looking forward to getting everybody ready for October.''

Andres Gimenez had a solo homer and Ramirez, Franmil Reyes and Bobby Bradley delivered consecutive RBIs in the sixth. Ramirez's first-inning home run was his 36th and he stole his 26th base, pulling closer to the fourth 30-30 season in Indians history.

''Jose is the best third baseman in the AL, probably the entire league,'' Morgan said. ''Seeing how much fun he has with the game and the way he acts in the dugout, it's fun and it's really cool to watch.''

Sam Hentges and Bryan Shaw followed Morgan, wrapping up the three-hitter for Cleveland's eighth shutout. The Indians need five victories in their final eight games to finish with a winning record for the ninth year in a row.

''Morgan has got an excellent changeup and it's got a lot of movement to be deceptive,'' White Sox manager Tony La Russa said.

Myles Straw singled, doubled and scored twice for Cleveland, while Eloy Jimenez and Jose Abreu had the other two hits for the White Sox.

Cease was struck on his pitching arm Friday by a one-hopper off the bat of Cleveland's Bradley Zimmer. Rodon left his Monday start in Detroit after 69 pitches.

White Sox: OF Brian Goodwin (back stiffness) and OF Adam Engel (leg soreness) each sat out their second straight game and continue to undergo treatment. Both reported discomfort Thursday after playing in the nightcap of a split doubleheader in Cleveland.