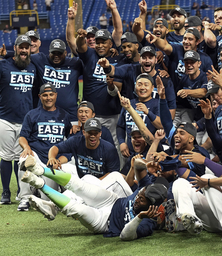 Tampa Bay Rays' Randy Arozarena dives into the gathering of players and coaches as they celebrate after defeating the Miami Marlins 7-3 to clinch the American League East during a baseball game Saturday, Sept. 25, 2021, in St. Petersburg, Fla. (AP Photo/Steve Nesius) 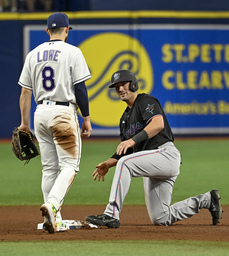 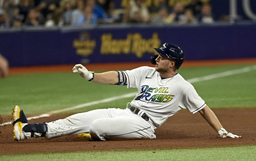 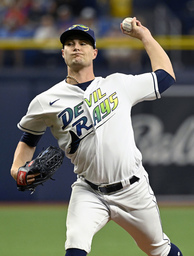 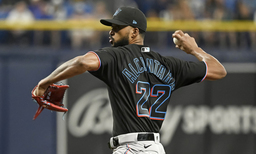 ST. PETERSBURG, Fla. (AP) In a division loaded with big-budget teams, this is becoming a familiar picture: the Tampa Bay Rays gathering on the mound, posing for a photo as AL East champions.

The Rays clinched their second straight division title, with Mike Zunino hitting a go-ahead homer and Brandon Lowe later adding a pair of RBI doubles to beat the Miami Marlins 7-3 on Saturday night.

''Like I've said before, this is the best team in the American League and today we showed it,'' Rays infielder Yandy Diaz said through an interpreter.

Reliever Pete Fairbanks retired Lewis Brinson on a foul popup with the bases loaded for the final out, giving the Rays the chance to celebrate on the field. Earlier in the day, Tampa Bay's magic number was cut to one when the New York Yankees beat Boston 5-3.

There was a standing ovation from the season-high announced crowd of 23,783 at Tropicana Field when the Yankees' victory was announced after the top of the sixth inning.

''It means the world,'' Rays center fielder Kevin Kiermaier said. ''It's a small-market team, not a huge payroll. We have so many well-above average players in our clubhouse. Certain guys make a certain amount for right reasons. ... When you have 26 guys to buy in, and show up to the field with the blue-collar mentality each and every day and want it more than the opposition, more times than not, then we'll have these moments. That's what our guys have.''

Tampa Bay improved to 96-59 and won its fourth division title since becoming a major league team for the 1998 season. The club debuted as the Devil Rays then, and wore jerseys with that name during this clinching victory.

The Rays, who lost the World Series to the Los Angeles Dodgers in six games last season, have never won the championship.

After Fairbanks got the last out, the Rays hugged and sprayed each other as their families watched from on the field, off to the side.

Inside the clubhouse, the Rays showed the locker room celebration on Zoom to their Triple-A Durham affiliate. The Rays used 61 players this year.

Shane McClanahan (10-6) allowed one run and six hits over five innings. The lefty worked out of several jams, holding the Marlins to 0 for 7 with runners in scoring position.

Brett Phillips reached to begin the fifth on a fielding error by second baseman Jazz Chisholm Jr. and Zunino then hit his 32nd homer, connecting off Sandy Alcantara (9-14) for a 3-1 lead.

After the Marlins twice got within one, Lowe's RBI double in the seventh gave Tampa Bay a 5-3 lead. Phillips had a sacrifice fly and Lowe, who was nearly hit by Diaz's foul while in the on-deck circle, extended the lead to 7-3 with another run-scoring double.

Alcantara gave up five runs - three earned - and nine hits over six-plus innings. He became the third major leaguer to reach 200 innings this season, and the first Marlins pitcher since Mark Buehrle in 2012.

Miami loaded the bases with one out in the sixth against Collin McHugh but scored just once to make it 3-2 on Eddy Alvarez's RBI grounder.

Alvarez was ejected after slamming his helmet to the ground after a called third strike in the eighth. Marlins manager Don Mattingly came out of the dugout to argue and was also tossed.

After Diaz put Tampa Bay up two again on a sixth-inning RBI single, Bryan De La Cruz got the Marlins within 4-3 on a run-scoring single off McHugh in the seventh.

Austin Meadows had a one-out triple in the fourth and scored on Joey Wendle's double. Soon after, there was a second reaction among some in the crowd when Giancarlo Stanton hit an eighth-inning grand slam to put the Yankees up 5-2 at Fenway Park.

Miguel Rojas put the Marlins up 1-0 on a leadoff homer in the third.

Rays rookie Wander Franco doubled in the eighth off Miami catcher Sandy Leon on Friday night and went to third on defensive indifference with Tampa Bay ahead 8-0. Third base coach Rodney Linares addressed it with the 20-year old Franco, who talked with Leon after the inning ended.

''Not ideal,'' Tampa Bay manager Kevin Cash said. ''The game was probably decided right then. It's a young player that we talked to. Appreciate the way the Marlins went about it and we'll try not to allow that to happen again. But that's ultimately on myself and Rodney just for not staying on top of it.''

Marlins: RHP Pablo Lopez (right rotator cuff) will have a bullpen session in the next couple days.

Rays: DH Nelson Cruz, who played Friday after missing two games due to illness, didn't start but pinch-hit in the seventh and had his drive caught by a leaping Jesus Sanchez in right.