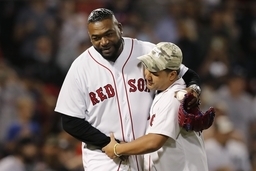 Former Boston Red Sox's David Ortiz, left, hugs Yolbin Rosario after Rosario threw out the ceremonial first pitch before a baseball game against the New York Yankees, Sunday, Sept. 26, 2021, in Boston. Rosario is the brother of Sgt. Johanny Rosario Pichardo, a U.S. Marine who was among 13 service members killed in a suicide bombing in Afghanistan. (AP Photo/Michael Dwyer)

BOSTON (AP) The finale of the series between the New York Yankees and Boston Red Sox on Sunday night was delayed four minutes when the fire alarms at Fenway Park went off.

The game resumed, and the Red Sox posted a note on the scoreboard that said: ''The cause of the alarm was investigated and no further action is required. Thank you for your patience and enjoy the game.''

The Red Sox did not immediately comment on the cause of the alarm.

The Red Sox and Yankees entered their last meeting of the regular season tied with 88-67 records, in position to meet in the AL wild-card game. The winner of Sunday's game would take the lead in the race to host the one-game playoff.