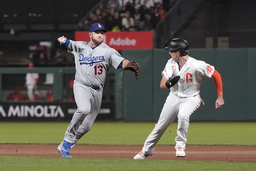 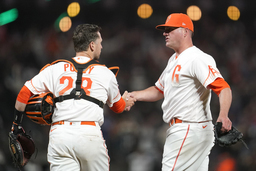 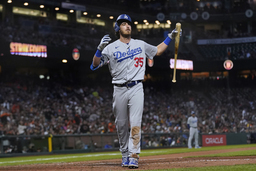 Los Angeles Dodgers' Cody Bellinger reacts after striking out against the San Francisco Giants during the seventh inning of a baseball game in San Francisco, Tuesday, July 27, 2021. (AP Photo/Jeff Chiu) 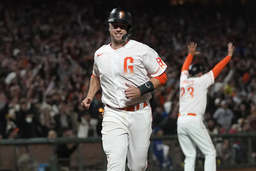 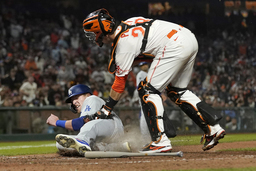 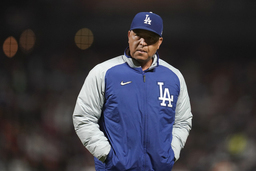 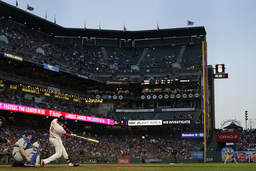 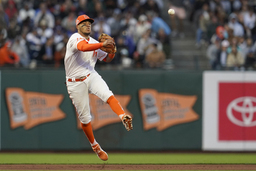 SAN FRANCISCO (AP) After benefiting from yet another late-game meltdown by their division rivals, Buster Posey and the Giants are starting to see a common theme.

Posey scored the tiebreaking run on a throwing error by first baseman Cody Bellinger in the eighth inning, and the Giants beat the Los Angeles Dodgers 2-1 on Tuesday night to increase their NL West lead to three games over the defending World Series champions.

''It boils down to guys just being prepared so when you get in tight moments, knowing you put the work in beforehand, it allows you to play relaxed,'' Posey said.

Blake Treinen (2-5) walked Posey and Mike Yastrzemski to begin the eighth. Darin Ruf hit a grounder to second baseman Max Muncy, who began to chase Yastrzemski back toward first before throwing out Ruf.

Bellinger, making his first start of the season at first base in order to rest his sore hamstring, then pump-faked toward second before launching a throw well over third baseman Justin Turner's head and into the protective netting along the third base line as the crowd of 32,878 roared.

''It just slipped out of my hand. There's no excuses. I just threw it too high,'' Bellinger said. ''I think a good throw gets him. It hurts. It definitely hurts. It was a horrible throw.''

Posey, who was on his way to third, scored easily.

''I was really just trying to be in a position rounding the bag that if it looked like an opportunity to go, I felt like I was far enough down,'' Posey said. ''I might have gotten too far down. I don't know, if the throw had been there it probably would have been pretty close. You get a break like that, you'll take it.''

Dodgers manager Dave Roberts thought Bellinger's vision might have been obstructed on the throw.

''I look at it and Muncy kind of got caught in the crossfire,'' Roberts said. ''Muncy might have been in his sight line. If he would have made an accurate throw and gets him, it's a great play. It just didn't work out.''

Bellinger singled and scored for the Dodgers. Muncy was 1 for 4 in his first game back off the paternity list.

Tyler Rogers (2-1) retired three batters to get the win. Jake McGee pitched the ninth for his 21st save.

The series at Oracle Park comes one week after the Giants won three of four in Los Angeles, including a pair of ninth-inning comebacks against Dodgers closer Kenley Jansen.

''When you're playing in big games against tough competition, it's helpful to be calm and poised in the biggest moments,'' Giants manager Gabe Kapler said. ''This team has demonstrated they're capable of doing that.''

After Bellinger bounced a leadoff single to right off starter Logan Webb leading off the fifth, Billy McKinney lined a ball into right-center to drive in Bellinger but was thrown out trying for second.

Posey's RBI single in the sixth tied it.

Dodgers starter Julio Urias pitched into the sixth and allowed one run. Urias, whose 12 wins are tied with Kyle Hendricks of the Cubs for most in the majors, struck out five and gave up six hits.

Webb had five strikeouts in six strong innings. He gave up three hits and a run after setting down 12 of the first 13 batters in his fourth start since coming off the injured list. The 24-year-old right-hander has four consecutive no-decisions with a 2.00 ERA over that span.

The Dodgers had runners at second and third against Rogers with one out in the eighth but failed to score. Luke Raley was thrown out sliding into home trying to score on Muncy's grounder, and Turner flied out.

The Giants' 63 wins are their third-most through 100 games in the San Francisco era. . Dodgers reliever Jimmy Nelson plunked Donovan Solano and Thairo Estrada with consecutive pitches in the seventh.

Dodgers: OF Mookie Betts (right hip) ran and did agility drills before the game. . LHP Clayton Kershaw threw 45 pitches in three innings of a simulated game. Roberts said the team will wait to see how Kershaw's left elbow responds before a determination is made on what to do next.

Giants: LHP Sammy Long was reinstated from the injured list after missing 16 games with a lower back strain. RHP Zack Littell was optioned to Triple-A Sacramento.