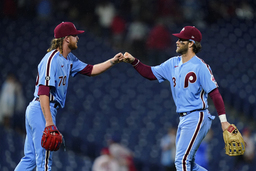 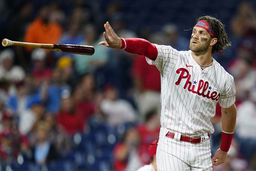 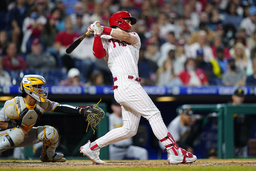 Philadelphia Phillies' Bryce Harper follows though after hitting an RBI-double off Pittsburgh Pirates' Miguel Yajure during the fifth inning of a baseball game, Friday, Sept. 24, 2021, in Philadelphia. (AP Photo/Matt Slocum) 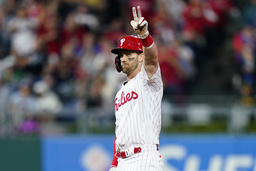 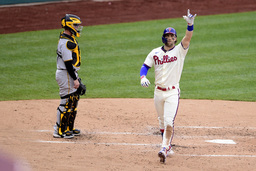 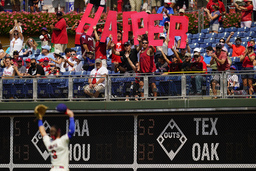 In this Sept. 12, 2021, file photo, Philadelphia Phillies' Bryce Harper cheers with fans before a baseball game against the Colorado Rockies in Philadelphia. The Phillies are trying to make the playoffs for the first time since 2011. Harper has slugged the Phillies into contention since the All-Star break and has them facing a make-or-break series in Atlanta. (AP Photo/Matt Slocum, File) 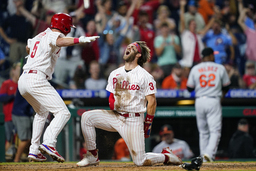 In this Sept. 21, 2021, file photo, Philadelphia Phillies' Bryce Harper (3) and Andrew Knapp (5) celebrate after Harper scored the game-winning run on a two-run triple by J.T. Realmuto during the 10th inning of an interleague baseball game against the Baltimore Orioles in Philadelphia. Harper has carried the Philadelphia Phillies into the NL East race. (AP Photo/Matt Slocum, File) 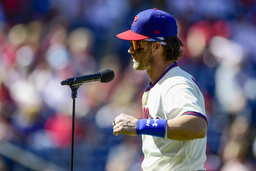 In this Sept. 26, 2021, photo, Philadelphia Phillies' Bryce Harper addresses the crowd before a baseball gameagainst the Pittsburgh Pirates in Philadelphia. The 28-year-old Harper is doing it all from sliding headfirst into home to win games to throwing fastballs from right field to home to save games for the Phillies in their pursuit of the NL East crown. (AP Photo/Derik Hamilton, FIle) 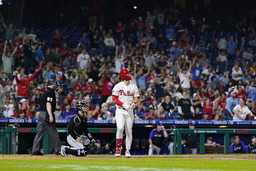 In this Sept. 11, 2021, file photo, Philadelphia Phillies' Bryce Harper watches after hitting home run against Colorado Rockies pitcher Tyler Kinley during the seventh inning of a baseball game in Philadelphia. Harper has slugged the Phillies into contention since the All-Star break and has them facing a make-or-break series in Atlanta. (AP Photo/Matt Slocum, File) 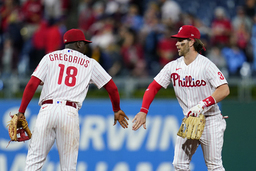 PHILADELPHIA (AP) Bryce Harper waited for the ''MVP!'' chants to fade as he stepped to the microphone at the Phillies' home finale to thank fans for sticking by them in the pennant race.

The National League MVP contender who bows every game to fans in right field - he might even play catch with a lucky few - told the city the Phillies just might have more games to play in Philadelphia.

''We have six more big ones,'' he said. ''Hopefully, we're back here Oct. 11 with you guys waving your flags and your towels and we bring back October baseball. We've got a big week ahead.''

Not since the halcyon days of Jimmy Rollins, Ryan Howard and Chase Utley have the Phillies played big September games with postseason stakes, and six this week will determine if they make the playoffs for the first time since 2011.

The 28-year-old Harper is doing it all - from sliding headfirst into home to win games to throwing fastballs home from right field to save games - for the Phillies in their pursuit of the NL East crown. He has slugged them into contention since the All-Star break and has them facing a make-or-break series in Atlanta.

The Braves are in control of the NL East when they open a three-game series with the Phillies on Tuesday. Atlanta leads the division by 2 1/2 games - its magic number to clinch is five - and the Phillies will likely have to sweep the series to have a shot at the division. Philadelphia ace Zack Wheeler gets the start in the opener against Atlanta's Charlie Morton.

''We have to go down there, we have do our job, we have to be ready from pitch one,'' Harper said. ''Every time you play somebody, you want to sweep them.''

The pennant-race pressure cookers are a hefty reason the Phillies gave Harper $330 million over 13 years to sign in 2019.

His contract is big.

His numbers, even bigger.

Harper is batting .313 with 34 home runs and 82 RBIs, leads the league with a 1.055 OPS and has a career-high 40 doubles. He has reached base in 22 straight games, the longest active streak in the National League. Harper has walked 20 times over his last 16 games and even has 10 outfield assists. His value to the Phillies makes him the betting favorite at -200 to win NL MVP, according to FanDuel Sportsbook, and in line to earn a second trophy to pair with his 2015 MVP with Washington.

Phillies fans chant ''MVP!'' for the player known as MV3 (in a nod to his uniform number) for a reason. Harper has managed a bad back that slowed him in the first half - he didn't make the All-Star team - and his durability down the stretch has been a bonus for manager Joe Girardi.

Just don't expect Harper to peek at his oversized stats on the scoreboard.

Ask around the National League, though, and Harper is going to have to fight it out for MVP.

''I get a chance to watch Fernando Tatis Jr. perform 18 times a year and he brings an unbelievable amount of energy to the field,'' Diamondbacks manager Torey Lovullo said. ''It's that type of stuff that he can do that, to me, points him toward him being the potential MVP winner this year. But there are a lot of great candidates.''

There are a few, like Washington outfielder Juan Soto. The 22-year-old Soto was the breakout star of the Nationals' 2019 World Series-winning team and leads the league in walks and on-base percentage.

''Juan should have consideration of being that MVP,'' said his manager, Dave Martinez. ''What he's done and what he's meant to this team, as you know, he carries this team, day in and day out.''

Soto carried the Nationals all the way to a 64-92 record entering Monday, not anywhere close to 2015 when they went 83-79 and finished second in the NL East and Harper was MVP.

Harper would have Mike Schmidt's vote: the three-time NL MVP and Hall of Fame third baseman wrote last week, '' The National League MVP is Bryce Harper, who on Aug. 1 put his team on his back, became the best player in the league, and stole it.''

Harper might be known in Philadelphia these days as the slugger who both launched 400-something-foot home runs into second decks and spawned exponentially more Etsy products.

The days of fans simply wearing an authentic No. 3 Philadelphia Phillies jersey or other pieces of team merchandise have yielded to a DIY knockoff revolution of Harper merch that translates into Big Bryce Bucks.

Kids raised on Wawa hoagies play baseball wearing the same rounded-eye Phillie Phanatic headband worn by Harper, while moms and dads make a mad rush for a ''Clearwooder'' shirt more fitting for Mare Sheehan than an NL MVP front-runner. Pop culture aficionados wouldn't miss out on the Gritty and Phanatic T-shirt designed as an homage to ''Pulp Fiction.'' Harper sure sparked a buying frenzy when he wore the shirt to the ballpark for his first opening day with the Phillies in 2019.

''He plays to the crowd, he wears wild colors, his people know just how to accessorize him and create memorabilia-themed for all occasions. For every Schmidt jersey, there are 10 Harpers,'' Schmidt wrote.

Just imagine how the diehards would look in 2021 playoff gear.