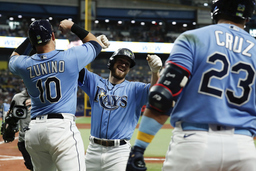 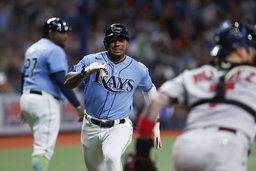 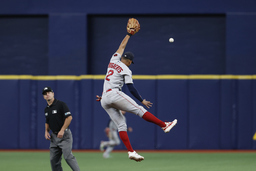 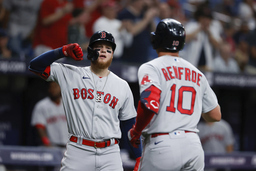 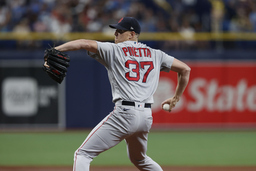 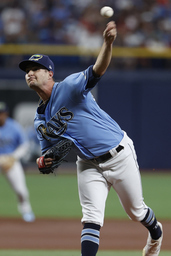 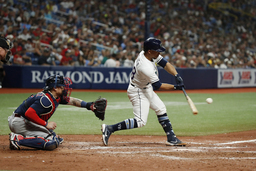 McClanahan (5-4) allowed one run and four hits, helping the Rays take a 1 1/2 game lead over Boston.

''The guys put it together,'' Tampa Bay manager Kevin Cash said. ''They played really, really good baseball. A lot of tight games. They're a good team, we're a good team. To be able to win three, that's not easy to do. So credit the guys a lot.''

Hunter Renfroe homered for the Red Sox, who have lost a season-high four in a row and five of six.

''We're still here,'' Boston manager Alex Cora said. ''Obviously, we don't like losing. We want to be more consistent. It's just four games. We know that. We still have a good team.''

Kike Hernandez and Rafael Devers had consecutive two-out singles in the ninth off Matt Wisler, who then retired J.D. Martinez on a short fly to right for his first save.

Boston went 0 for 6 with runners in scoring position and left 10 runners on base.

Nick Pivetta (8-5) retired his first eight batters before walking Mike Zunino on four pitches with two outs in the third. After falling behind 3-0, Pivetta got the count to 3-2 before Lowe lined his career-high 23rd homer into the right-field seats.

''I think it kind of speaks for itself, I think we came out and we played our baseball.'' Lowe said of Rays' play during the sweep. ''In all honesty, that's kind of what we expect out of ourselves. We know we're not going to win every single game, but if we can play like we did these past few days we'll be in good shape.''

Manuel Margot put the Rays up 3-1 with an RBI single in the fifth inning.

Alex Verdugo had a leadoff double off Drew Rasmussen in the seventh and scored on a wild pitch with two out, pulling the Red Sox within 3-2. Hernandez singled and Devers walked before Rasmussen avoided further damage by getting a fielder's choice grounder from Martinez.

Rasmussen walked Xander Bogaerts to start the eighth and retired the next two batters before Ryan Sherriff entered and struck out Verdugo.

''Tonight we had a lot of traffic,'' Cora said. ''We need to do a better job controlling the strike zone in certain situations. When we control the strike zone, we're good. We don't, we get into trouble.''

Pivetta gave up three runs and three hits in 4 ? innings. He had allowed just two hits over 11 ? scoreless innings in two previous starts - both this season - against the Rays. The right-hander was pulled after 6 ? no-hit innings on June 24 at Tampa Bay, joining Babe Ruth (May 20, 1916 against the St. Louis Browns) as the only Red Sox pitchers to be removed from a game with no hits allowed in six or more innings.

Hansel Robles gave up a hit during a scoreless sixth in his Boston debut. He was acquired from Minnesota on Friday.

Boston LHP Chris Sale will make a fifth minor league rehab start later this week for Triple-A Worcester and will have his status re-addressed afterwards. He last pitched in the majors on Aug. 13, 2019.

Recently acquired slugger Kyle Schwarber (hamstring) is nearing a rehab assignment and will take part in an off-day workout Monday in Detroit.

The Rays have swept eight series of three or more games, which ties Milwaukee for the most in the majors. ... Boston was swept for the second time. The other was the season-opening series Apr. 2-4 against Baltimore.

Red Sox: Hernandez was pinch-run for the ninth. He had bruised his side earlier in the game on a defensive play at second base. ... INF Marwin Gonzalez (right hamstring strain) might be back Tuesday.

Rays: LHP Jeffrey Springs (right knee sprain) was placed on 10-day injured list. Tampa Bay has 15 players on the IL and all are pitchers. ... RHP Chris Archer (right forearm tightness) left after one inning in his start at Triple-A Durham due to left hip soreness.