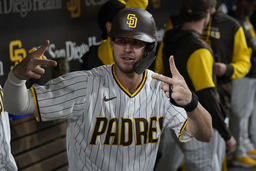 San Diego Padres' Wil Myers poses for a picture in the dugout after hitting a home run during the eighth inning of a baseball game against the San Francisco Giants, Tuesday, Oct. 4, 2022, in San Diego. (AP Photo/Gregory Bull)