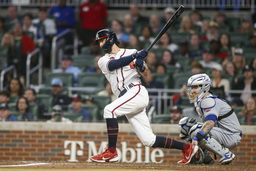 Atlanta Braves' Dansby Swanson follows through on a single during the third inning of the team's baseball game against the New York Mets, Saturday, Oct. 1, 2022, in Atlanta. (AP Photo/Brett Davis)