The contest has ended, thanks for playing! 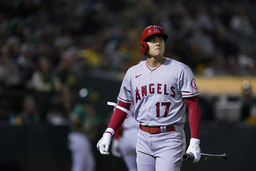 Los Angeles Angels' Shohei Ohtani walks to the dugout after striking out against the Oakland Athletics during the eighth inning of a baseball game in Oakland, Calif., Tuesday, Oct. 4, 2022. (AP Photo/Godofredo A. Vsquez)