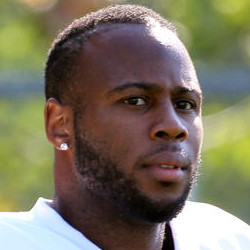 New England Patriots running back James White has been a big part of the passing attack over the last few weeks. He rushed four times for eight yards and caught eight of his nine targets for 65 yards during the Week 6 loss to the Denver Broncos. Quarterback Cam Newton struggled to move the ball on offense, so there were plenty of checkdown chances for White here. The Pats continue to heavily involved White in the gameplan, so that should remain the same against the San Francisco 49ers in Week 7. He'll be a PPR flex option for that game.

New England Patriots RB James White caught eight passes for 65 yards against the Denver Broncos in Week 6. He also rushed for eight yards on four carries during the game.

Fantasy Spin: White was a popular target for Cam Newton this week and will continue to be used mostly as a receiver for the Patriots. He can be at least a flex option in fantasy leagues and could be a low-end No. 2 running back in deeper point-per-reception leagues.

New England Patriots running back James White returned from his two-game absence against the Kansas City Chiefs in Week 4. He finished with three rushing attempts for 21 yards and caught seven receptions through the air in the loss. The Pats continue to heavily involve White in the passing game and that should be the case against the Denver Broncos in Week 6. However, White doesn't get too many attempts on the ground, so he'll hold PPR flex value for this one.

New England Patriots running back James White returned last week after missing two games due to personal reasons. He didn't miss a beat, hauling in seven receptions for 38 yards and rushed three times for 21 yards in the Week 4 loss to the Kansas City Chiefs. Right now, White might be the most trustworthy option in the New England backfield. The Pats are likely going to be forced to start Brian Hoyer or Jarrett Stidham versus the Denver Broncos this week. Both of them showed no ability to move the ball down the field with deep passes. Which means, the Pats are likely going to use short passes to move the ball against Denver. White saw seven receptions last week, so he's likely going to see a similar workload again with Cam Newton expected to be sidelined. White might carry low-end RB2 value in PPR leagues in Week 5.

New England Patriots running back James White returned with a purpose during the Week 4 matchup with the Kansas City Chiefs. He rushed three times for 21 yards and caught seven of his eight targets for 38 yards through the air. White is only given a handful of carries in the backfield, but continues to be productive in PPR leagues. However, his value is somewhat shaky in anything other than PPR formats right now. He might have flex value against the Denver Broncos next week.

New England Patriots RB James White caught seven passes for 38 yards against the Kansas City Chiefs in Week 4. He also rushed for 21 yards on three carries during the game.

Fantasy Spin: White was a popular target in the passing game for Brian Hoyer and Jarrett Stidham against the Chiefs. He probably will be used mostly out of the backfield moving forward and can be a flex option in point-per-reception leagues.

New England Patriots running back James White has missed each of the last two games due to a family tragedy. He was able to return to practice on Thursday, so it sounds like he'll be ready for the Week 4 matchup against the Kansas City Chiefs. He'll slide back into his role as the main receiving back. His return is going to significant hurt the value of Rex Burkhead. White is likely going to be in the flex conversation in PPR leagues for their matchup against Kansas City.

New England Patriots RB James White (personal) returned to practice Wednesday, Sept. 30. 'A great teammate, great guy. Hard worker. happy to have him back, prayers to his situation,' CB Stephon Gilmore said. White's father passed away in a Sept. 20 car crash, and White has missed the past two games while being away from the team.

Fantasy Spin: White's role for Week 4 against the Kansas City Chiefs is a little uncertain, but he is likely to get back into the mix in some way, shape or form. Sony Michel and Rex Burkhead shined last week in his absence, so it might be a good idea to keep White reserved for fantasy purposes.

New England Patriots running back James White (personal) has been ruled out for the Week 3 matchup against the Las Vegas Raiders. It's unclear when White will return to the team after his father died in a car accident last weekend. His mother was in critical condition after the accident. Both Sony Michel and Rex Burkhead will see more touches with White inactive. Neither of them are more than a desperation flex option.

New England Patriots RB James White (non-injury) did not participate in practice Friday, Sept. 25, and has been ruled out for Week 3.

Fantasy Spin: There is no timetable for White's return since he is dealing with a family issue, so fantasy players should look for other options. Rex Burkhead likely will take over White's role in the offense and could be a flex option in some leagues.

New England Patriots C David Andrews (hand) and RB James White (personal) did not practice all week and have been ruled out for Week 3 versus the Las Vegas Raiders. LB Josh Uche (foot) did not practice Friday, Sept. 25, and has also been ruled out. DL Adam Butler (shoulder), WR Julian Edelman (knee), WR N'Keal Harry (ankle) and OL Isaiah Wynn (calf) were limited in practice Friday and are listed as questionable. LB Brandon Copeland (knee) was not assigned a practice designation Friday after being limited in practice earlier in the week, but he is also expected to play.

Fantasy Spin: White is dealing with a personal matter, so his status for Week 3 is uncertain at this point. He would be a flex option in fantasy leagues if he plays in the game, but Rex Burkhead could also be a flex option if White sits out.

Updating previous report, New England Patriots RB James White is inactive for Week 2 after losing his father, Tyrone, in a car accident Sunday, Sept. 20. James White's mother also was in the car and is in critical condition.

Fantasy Spin: The awful news understandably explains his abrupt absence. The Patriots will utilize RBs Sony Michel and Rex Burkhead in White's stead. It wouldn't be a surprise to see the veteran back miss Week 3 if his mother remains in medical care. The Huddle team offers its condolences to the White family.

New England Patriots running back is inactive for his team's Sunday night game against the Seattle Seahawks. In tragic news, White's father was in a car crash earlier on Sunday and did not survive. His mother was also involved in the crash and is in critical condition. White obviously has more important things on his mind than football and will be inactive for personal reasons. Prayers go out to him and his family. From a fantasy perspective, look for Rex Burkhead and possibly rookie J.J. Taylor to fill in for White on passing downs.

New England Patriots running back James White (personal) is inactive for Sunday night's game against the Seahawks. There was a death in White's family, leading to his surprise listing as inactive. The 28-year-old won't play in Week 2 and could understandably be away from the team for several days. Sony Michel, Rex Burkhead and J.J. Taylor will pick up the slack in White's absence.

Fantasy Spin: It is not known if White is dealing with an injury, so fantasy players should keep an eye on the situation. Sony Michel and Rex Burkhead will receive most of the work at running back with White out and both can be considered flex options.

New England Patriots running back James White is likely going to be an important part of the offense this season. The team likes to use him in both the running and passing game quite often. White rushed five times for 22 yards and hauled in all three of his targets for 30 yards through the air. He probably would've been more involved, but the Patriots were running away with the game versus the Miami Dolphins in Week 1. There should be more chances for White against the Seattle Seahawks in Week 2. He'll be a flex option for PPR leagues, but probably won't be anything more than a risky RB3 without PPR scoring.