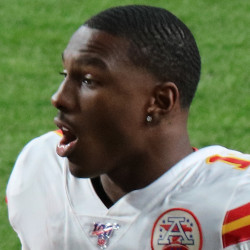 Kansas City Chiefs wide receiver Sammy Watkins (hamstring) will remain sidelined for Sunday's game versus the Raiders, this time due to a hamstring ailment, but the Chiefs will get back Mecole Hardman (COVID-19) off of the COVID-19/reserve list. Watkins has been sidelined since Week 5, having fallen firmly off the fantasy radar due to the length of his absence. With Watkins still out of the equation, Hardman should gain some considerable single-game DFS appeal, along with deep season-long consideration due to his big play ability in the vaunted Kansas City offense. Watkins' next chance at taking the field comes in Week 12 against Tampa Bay, a matchup that would likely keep him on the outside looking in of season-long roster consideration.

The Kansas City Chiefs placed wide receiver Mecole Hardman on the Reserve/COVID-19 list on Wednesday. It's unclear if Harman actually tested positive for the virus or if he was deemed a high-risk close contact to someone else that did. The good news for the Chiefs and Hardman is that Kansas City is on their bye this week and won't play again until Week 11 against the Raiders. There's a good chance that he'll be able to clear the league's COVID-19 protocols by then. However, it's also likely that receiver Sammy Watkins (hamstring) is able to return after the bye, further clouding Hardman's role in a KC offense that has plenty of weapons. The 22-year-old second-year wideout is a boom/bust WR4/flex in deeper leagues with 25 catches for 395 yards and three touchdowns through nine games.

Kansas City Chiefs wide receiver Mecole Hardman caught seven of his nine targets for 96 yards and a touchdown in Week 9 against the New York Jets. Hardman had a career day and saw an uptick in snaps with Sammy Watkins (hamstring) remaining sidelined. Watkins has a chance to return in Week 9 and that would limit Hardman's value. Even if Watkins is out, Hardman still has plenty of teammates to compete with for targets and that makes him a boom or bust player on a weekly basis. Hardman should be viewed as a WR4/WR5 option in weekly leagues. Hardman will face off against the Panthers in Week 9.

Kansas City Chiefs wide receiver Mecole Hardman only received one target on Monday and recorded zero yards against the Buffalo Bills. Hardman is a weekly boom or bust candidate and he had some potential in Week 6 with Sammy Watkins (hamstring) sidelined, but it was Demarcus Robinson who took advantage on Monday. Due to inconsistent performances, Hardman is only WR4/WR5 with upside most weeks. Hardman will look to pick up some stats against the Denver Broncos in a Week 7 matchup.

Kansas City Chiefs wide receiver Mecole Hardman could become the No. 3 target for quarterback Patrick Mahomes during what is projected to be an offensive eruption Monday versus Buffalo. With Sammy Watkins (hamstring) having been ruled out, Hardman is likely first in line to see an increase in targets. When Hardman has been targeted this season, he has made them count, hauling in 13 receptions on 17 attempts for 194 yards and two scores. Hardman is yet to rack up more than four receptions in any game in his career, but his value primarily stems from his deep threat potential. His boom-or-bust nature makes him a volatile season-long option, but gives him upside DFS appeal for those fantasy managers intrigued by Mondays two-game slate.

Kansas City Chiefs wide receiver Mecole Hardman caught all four of his targets for 27 yards and a touchdown against the New England Patriots in Week 4. Hardman flashes dynamic speed and has a role in the Chiefs offense. The problem for fantasy managers is that Chiefs offense is so talented that Hardman will be a shaky weekly play. Hardman still provides value as a WR4/WR5, but managers should expect a rollercoaster ride with the second year receiver. Hardman will face the Las Vegas Raiders in Week 5.

Kansas City Chiefs wide receiver Mecole Hardman caught four of his six targets for 81 yards and a touchdown in Week 3 against the Baltimore Ravens. Hardman dropped what would've been a second touchdown right before halftime, but had a solid game nonetheless. Hardman has plenty of competition in an explosive offense and managers should expect inconsistency out of the young receiver. He remains best served in DFS, but can be owned in deeper leagues as a WR4/5 with upside.

Kansas City Chiefs special teams coordinator Dave Toub said the team is expecting a lot of good things from second-year wide receiver/return man Mecole Hardman this year. Hardman is the team's top kick returner to start the season, and he'll be the No. 3 wideout behind Tyreek Hill and Sammy Watkins. He worked hard in the offseason to improve as a receiver, working on his release and defeating press coverage. The 22-year-old had the third-most kick-return yards in 2019 with 704, and his 26.07 average yards per kickoff return was also the third-most. Hardman was extremely efficient as a receiver in his rookie year, but the problem is that he saw just 41 targets in 16 games. If Hill or Watkins sit out with injuries this year, Hardman could really explode. In Week 1 against a suspect Texans secondary, Hardman will a sleeper as a WR4/flex in deeper fantasy leagues.