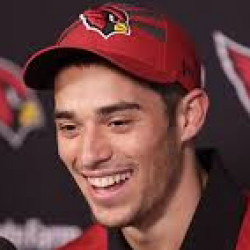 The Baltimore Ravens officially signed former Arizona Cardinals wide receiver Andy Isabella to their practice squad on Monday and waived wide receiver Bailey Gaither in a corresponding move. Isabella will give the Ravens thin receiving corps some more depth with Rashod Bateman (foot) currently injured. The 25-year-old was a former second-round pick of the Cardinals in 2019 out of Massachusetts, and he put up 33 catches on 54 targets for 447 yards and three touchdowns in 39 games (three starts) with Arizona before he was cut last week. In three games with the Cardinals this year, he caught just two of five targets for 21 yards and no touchdowns. It's unlikely that Isabella will see the field much in Baltimore, if at all.

Free agent wide receiver Andy Isabella signed with the Baltimore Ravens practice squad on Wednesday. The Arizona Cardinals released Isabella on Tuesday, and the Ravens quickly scooped him up. He had two catches for 21 yards over three games in 2022. The former second-round pick had 33 catches for 447 yards and three touchdowns over 39 games with Arizona. Isabella will be given a fresh start and will look to turn things around in Baltimore. The 25-year-old adds wide receiver depth to the Ravens but is not on the fantasy radar in 2022.

The Arizona Cardinals released wide receiver Andy Isabella on Tuesday. Isabella was the team's second-round pick back in 2019 and finishes his Arizona career with 33 catches for 447 yards and three touchdowns over 39 games. Arizona selected Isabella with the 62nd overall pick in the 2019 draft, two picks ahead of D.K. Metcalf and four picks before Diontae Johnson. The Cardinals had been trying to trade Isabella for months but they will instead cut bait. They filled Isabella's roster spot by signing center Billy Price off of the Las Vegas Raiders' practice squad. Isabella has a 4.31 40 time and is likely to draw some interest around the league.

Dynasty | The Cardinals released receiver Andy Isabella Dynasty Analysis: The 2019 Twitter darling was a hot commodity during rookie drafts but ultimately never panned out and the team has finally moved on. While he may still garner interest from another team, 2020 remains Isabella's best year, producing a 21/224/2 stat line. He's unlikely to pop back up on the dynasty radar and the light can be turned off for now.

Arizona Cardinals wide receiver Andy Isabella (back) returned to practice on Wednesday. Both he and teammate Rondale Moore (hamstring) missed their Week 2 matchup against the Raiders and are trying to return Sunday when they face the Rams. The Cardinals' passing attack has struggled over the first two games forcing quarterback Kyler Murray to make plays with his legs. While the 25-year-old wideout has yet to make an impact in his career, his presence would add another option for the offense. Isabella is not a player to consider starting in fantasy football but rather adds a small amount of value to Murray.

Arizona Cardinals wide receiver Andy Isabella (back) is not expected to play in Week 2 against the Las Vegas Raiders. He is dealing with a strained back, but the injury is not considered long-term. The 25-year-old has been unable to practice this week and will not be available against the Raiders. He caught one of three targets for 10 yards during Sunday's Week 1 loss to the Chiefs. Isabella, Rondale Moore (hamstring), and DeAndre Hopkins (suspension) are out. A.J. Green and Greg Dortch should see an uptick in targets with Moore sidelined, but both are dart throws at best in deep-league formats.

Arizona Cardinals wide receiver Andy Isabella could have some appeal in the season opener against the Kansas City Chiefs. Rondale Moore (hamstring) will be held out of action, so that could open the door for Isabella to slot in as the team's No. 3 wide receiver option behind Marquise Brown and A.J. Green. The speedy wideout was impressive during the preseason as he posted 14 receptions for 226 yards in three games while showing off his big-play ability. In what could be a high-scoring game between two good offenses, Isabella could offer some streaming value in deep formats with a more prominent role in the offense. Antoine Wesley could see some increased playing time, but Isabella looks like the higher upside play.

Arizona Cardinals wide receiver Andy Isabella could have some appeal in the season opener against the Kansas City Chiefs. Rondale Moore (hamstring) could potentially be held out of action, so that could open the door for Isabella to slot in as the team's No. 3 wide receiver option behind Marquise Brown and A.J. Green. The speedy wideout was impressive during the preseason as he posted 14 receptions for 226 yards in three games while showing off his big-play ability. In what could be a high-scoring game between two good offenses, Isabella could offer some streaming value in deep formats if he is to be inserted into a prominent role.

Arizona Cardinals wide receiver Andy Isabella had yet another strong showing in the team's preseason finale, as he tallied five receptions for 115 yards on eight targets. The speedy wideout showed off his big-play ability in this one, as his longest reception went for 74 yards. The 25-year-old barely saw the field last season, but his strong preseason could earn him some playing time heading into the 2022 campaign. Still, DeAndre Hopkins, Marquise Brown, Rondale Moore, Zach Ertz, and A.J. Green headline a strong pass-catching core for the Cardinals, which puts Isabella at best sixth in line for targets. He is well off the fantasy radar for now.

Arizona Cardinals wide receiver Andy Isabella caught five passes for 54 yards in Sunday's 24-17 loss to the Baltimore Ravens. Isabella shared the team lead in catches with Victor Bolden in this one, as he was able to command eight targets in a pass-heavy game script. The speedy wideout has been solid through the first two preseason games, but it is hard to imagine him getting a significant role in the Arizona offense after he saw just one target during the 2021 season. Isabella will be the fifth option at best on the wide receiver depth chart, as DeAndre Hopkins, Marquise Brown, Rondale Moore, and A.J Green will headline the wide receiver core for quarterback Kyler Murray. Isabella needs a lot to unfold before he has any fantasy value.

Arizona Cardinals wide receiver Andy Isabella led the team with four catches for 57 yards in Friday's preseason opener. The speedy wideout is looking to carve out a role in a crowded wide receiver room, which may be a tall task when you consider the likes of DeAndre Hopkins, Marquise Brown, Rondale Moore, and A.J. Green are in the mix for targets. The 25-year-old saw just one target in eight games last season, so it is hard to envision him having any sort of role in the Arizona offense. He is well off the fantasy radar as we inch closer to the regular season.