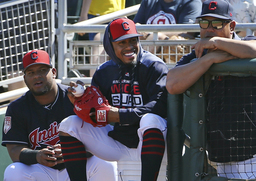 In this March 18, 2019, file photo, injured Cleveland Indians shortstop Francisco Lindor, center, smiles as he watches his teammates during the first inning of a spring training baseball game against the San Diego Padres in Goodyear, Ariz. Lindor says hes ready to make his season debut after being injured. Lindor sat out Clevelands first 18 games with a sprained ankle he sustained during spring training in Arizona while recovering from an offseason calf injury. Hes expected to be in Clevelands lineup this weekend against Atlanta. (AP Photo/Ross D. Franklin, File)

He was activated from the injured list Saturday before a doubleheader against the Atlanta Braves. He had been out since spraining an ankle near the end of spring training while recovering from a calf sprain.

The Indians went 11-7 without Lindor, a three-time All-Star, Gold Glove winner and leader for the three-time defending AL Central champions.

Lindor cleared his final medical hurdle during a three-game rehab stint with Triple-A Columbus this week. It's not clear if Lindor will be limited in the early stages of his return.

He set career highs with 38 homers and 92 RBIs last season.