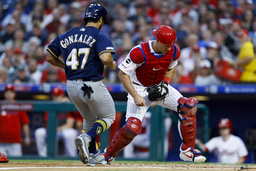 Philadelphia Phillies catcher J.T. Realmuto, right, forces out Milwaukee Brewers' Gio Gonzalez at home on a ball hit by Ryan Braun during the third inning of a baseball game Wednesday, May 15, 2019, in Philadelphia. (AP Photo/Matt Slocum) 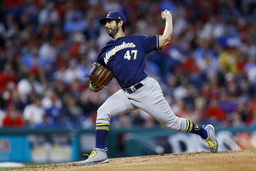 Milwaukee Brewers' Gio Gonzalez pitches during the third inning of the team's baseball game against the Philadelphia Phillies, Wednesday, May 15, 2019, in Philadelphia. (AP Photo/Matt Slocum) 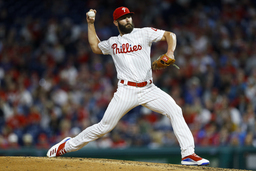 Philadelphia Phillies' Jake Arrieta pitches during the fourth inning of a baseball game against the Milwaukee Brewers, Wednesday, May 15, 2019, in Philadelphia. (AP Photo/Matt Slocum) 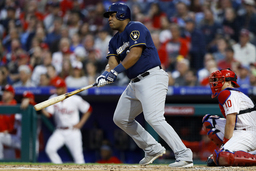 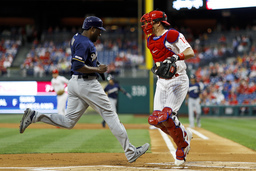 Milwaukee Brewers' Lorenzo Cain, left, scores past Philadelphia Phillies catcher J.T. Realmuto on a single by Ryan Braun during the first inning of a baseball game Wednesday, May 15, 2019, in Philadelphia. (AP Photo/Matt Slocum) 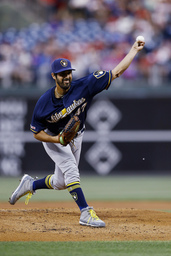 Milwaukee Brewers' Gio Gonzalez pitches during the first inning of the team's baseball game against the Philadelphia Phillies, Wednesday, May 15, 2019, in Philadelphia. (AP Photo/Matt Slocum) 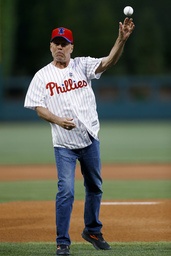 Actor Bruce Willis throws out a first pitch before a baseball game between the Philadelphia Phillies and the Milwaukee Brewers, Wednesday, May 15, 2019, in Philadelphia. (AP Photo/Matt Slocum)

PHILADELPHIA (AP) Milwaukee Brewers manager Craig Counsell sneaked peeks at the television in his office for a Bucks score as he praised another solid outing from Gio Gonzalez. Once the clubhouse doors opened, Brewers huddled around all the TVs and ''Let's go Bucks!'' was shouted when Milwaukee went up late in the NBA playoffs.

The Brewers aren't going to grab the bold headlines or get the most clicks in Milwaukee these days, at least not while the Bucks are playing. But the Brewers keep on winning and could give the city another reason to pay attention in the postseason.

Gonzalez continued to make the most of his second stint in Milwaukee, allowing one run while pitching into the sixth inning as the Brewers beat the Philadelphia Phillies 5-2 on Wednesday night.

''The thought process was just, try and keep us in there as long as possible,'' Gonzalez said.

Gonzalez (2-0) was hardly dazzling in his fourth start this season, but the veteran lefty did enough to again reward the Brewers' faith in bringing him back. Gonzalez finished last year with Milwaukee, going 3-0 in five starts down the stretch, and the Brewers made it to the NL Championship Series. But he was a free agent until he signed a minor league contract with the Yankees in March. After opting out of his deal with New York, he returned to a Milwaukee team in need of some rotation help.

''Gio's been a stabilizer in the whole thing,'' Counsell said.

Jesus Aguilar ripped a two-run single off Jake Arrieta (4-4) in the third to give the Brewers a 4-1 lead and they hung on to take two of the first three games of this four-game set between NL teams with playoff aspirations. Josh Hader tossed a scoreless ninth for his 11th save.

''With Hader doing what he does late in the game, it was just a little too late for us to get it going,'' Arrieta said.

The highlights for Milwaukee might get skimmed by fans nearly 900 miles away glued to Game 1 of the NBA's Eastern Conference final between the Bucks and Toronto Raptors.

Bryce Harper lined a double to left field and made a sliding catch in right a day after he banged his left knee into the wall on a sliding catch. Harper, who signed a $330 million, 13-year contract with the Phillies as a free agent, has been slumping and struck out for the 57th time. His double snapped an 0-for-15 funk that earned him some mild boos from Phillies fans who have been wild for the All-Star since the day he signed.

''I don't have a tangible reason why we shouldn't play him,'' Kapler said. ''We think he gives us our best chance to win tonight. We think he will be positively impacted by being in tonight's lineup. We'll consider it on a day-to-day basis. He and I will have those conversations.''

Harper's arrival was just the biggest one in an offseason full of All-Star acquisitions for the Phillies. Two others were also in the middle of the action Wednesday. Jean Segura hit a solo homer in the first inning, but outfielder Andrew McCutchen misplayed a deep drive on the warning track in the fifth and the ball glanced off his glove for an error.

Arrieta was bailed out of that miscue by a sensational, barehand throw from third baseman Sean Rodriguez to nail Keston Hiura at first.

''I just didn't necessarily do my job tonight,'' Arrieta said.

Brewers: C Manny Pina left in the third inning with right hamstring discomfort and will go on the disabled list. ... RHP Chase Anderson (finger laceration) will come off the injured list and start Saturday at Atlanta. His return pushes Freddy Peralta to the bullpen.

Phillies: INF Scott Kingery (strained right hamstring) played seven innings during a rehab game Tuesday at Class A Lakewood. Kapler said it was ''probably a stretch'' for Kingery to return to the Phillies this weekend. ''He would be used and viewed in a similar fashion as he has been in the past with the Phillies, as an option to start at any position, third, short, second, center, left, right,'' Kapler said. ... RHP Victor Arano threw a 20-pitch bullpen Tuesday and needs a few more days before he returns from elbow inflammation. ''I think he feels good about his progress. No setbacks,'' Kapler said.

Bruce Willis was booed in his No. 19 Phillies jersey when ''The Sixth Sense '' actor one-hopped the first pitch .