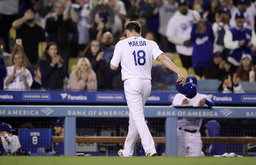 Los Angeles Dodgers starting pitcher Kenta Maeda, of Japan, walks back to the dugout as fans cheer, as he was removed during the seventh inning of the team's baseball game against the San Diego Padres on Wednesday, May 15, 2019, in Los Angeles. (AP Photo/Mark J. Terrill) 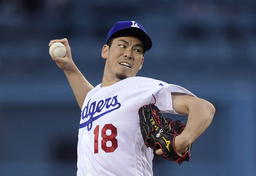 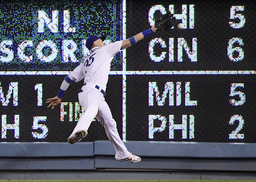 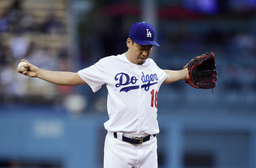 Los Angeles Dodgers starting pitcher Kenta Maeda, of Japan, gets set to pitch during the first inning of a baseball game against the San Diego Padres Wednesday, May 15, 2019, in Los Angeles. (AP Photo/Mark J. Terrill) 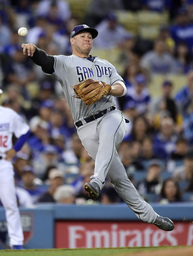 San Diego Padres third baseman Ty France attempts to throw out Los Angeles Dodgers' Corey Seager at first during the second inning of a baseball game Wednesday, May 15, 2019, in Los Angeles. Seager was safe at first on the play. (AP Photo/Mark J. Terrill) 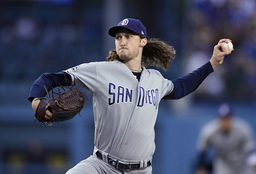 San Diego Padres starting pitcher Matt Strahm throws to the plate during the first inning of a baseball game against the Los Angeles Dodgers on Wednesday, May 15, 2019, in Los Angeles. (AP Photo/Mark J. Terrill)

LOS ANGELES (AP) Kenta Maeda dominated on the mound and helped himself at the plate.

The right-hander struck out 12 batters and drove in both runs in leading the Los Angeles Dodgers to a 2-0 victory over the San Diego Padres on Wednesday night.

''It's hard to imagine him being any better,'' Dodgers manager Dave Roberts said. ''It was really, really fun to watch. He was great all night long.''

Los Angeles wrapped up a 7-2 homestand, with four of the wins being shutouts.

Maeda gave up three hits over 6 2/3 innings and reached double-digit strikeouts for the fifth time in the majors. He finished one short of his career high for Ks set in 2016 against San Diego.

''I was able to mix everything up tonight,'' Maeda said through a translator. ''I did have the conviction and attacked the strike zone while keeping my pitch count to a minimum.''

Maeda (5-2) had the key hit of the game, too, with a two-out, two-run bloop single to right field in the second. He became the first Dodgers pitcher to have two hits and two RBIs in a game since Zack Greinke in 2014.

Kenley Jansen worked the ninth for his 14th save, aided by a diving play up the middle from second baseman Kike Hernandez. With two runners aboard, Jansen struck out Hunter Renfroe and pinch-hitter Alex Dickerson to end it.

Jansen retired Renfroe for the second consecutive night after the slugger tagged him for a game-winning grand slam May 5 in San Diego.

Four Dodgers pitchers combined for a season-high 16 strikeouts. Maeda threw 85 pitches, 64 for strikes. His 22 swinging strikes were the second-most in his career according to Inside Edge, with 14 coming on his slider.

Matt Strahm (1-3) went five innings and allowed two runs on seven hits. The left-hander, who has a 2.33 ERA in five road starts, struck out five.

''Matt gave us an opportunity to win. He mixed well and could have easily had zero runs through five,'' Padres manager Andy Green said. ''Those were soft hits that brought those runs in.''

Corey Seager got two hits for the Dodgers.

Eric Hosmer had three of San Diego's four hits. The Padres dropped four of five on their road trip and are 4-7 in their last 11 games overall.

Dodgers third baseman Justin Turner was hit by a pitch for the fourth straight game. When he was plunked by Strahm's fastball in the second inning, Turner became the first Dodgers player since Hughie Jennings in 1900 to be hit in four consecutive games, according to the Elias Sports Bureau.

Turner has been hit by a pitch seven times this season, which is second in the National League.

Manny Machado extended his hitting streak to eight games with a double in the fourth. The Padres' shortstop - who was with the Dodgers during the second half and the postseason last year - is batting .368 (7 for 19) with four home runs and seven RBIs against LA.

Dodgers right fielder Cody Bellinger had a rare 0-for-3 night, but is still leading the majors with a .401 batting average. He walked in the fourth and has reached base safely in all 24 home games.

Padres: The earliest SS Fernando Tatis Jr. could return is Monday, as he continues to rehab from a strained left hamstring at the team's spring training facility in Arizona. The rookie sustained the injury April 28 while stretching to make a catch at second base.

Dodgers: LHP Hyun-Jin Ryu is scheduled to start Sunday's series finale in Cincinnati. Ryu, who has not allowed a run in his last two outings, will have six days of rest between starts. He took a no-hitter into the eighth inning and threw a career-high 116 pitches Sunday against Washington.