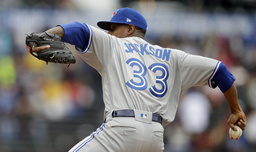 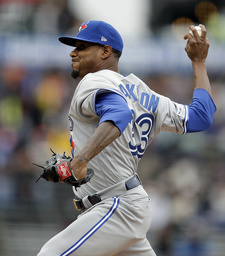 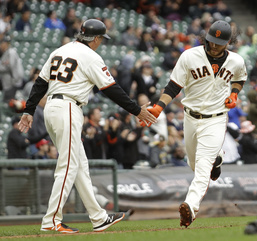 San Francisco Giants' Brandon Crawford, right, is congratulated by third base coach Ron Wotus (23) after hitting a home run in the sixth inning of a baseball game against the Toronto Blue Jays Wednesday, May 15, 2019, in San Francisco. (AP Photo/Ben Margot)

San Francisco Giants catcher Aramis Garcia, right, tags out Toronto Blue Jays' Randal Grichuk at home plate in the sixth inning of a baseball game Wednesday, May 15, 2019, in San Francisco. Grichuk was out on the double play while attempting to score on a hit by Toronto's Billy McKinney. (AP Photo/Ben Margot) 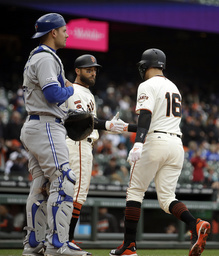 SAN FRANCISCO (AP) Edwin Jackson thinks his new place in baseball history has as much to do with his reputation as it does his repertoire.

Nearly 16 years after Jackson made his big league debut, both are still holding up.

Jackson became the first player in major league history to play for 14 teams when he made his Toronto Blue Jays debut and pitched five innings without a decision in a 4-3 loss to the San Francisco Giants on Wednesday.

''It says I have a lot of perseverance,'' Jackson said. ''I'm not one to give in. I feel like out of those 14 teams, some of those teams have had situations that would probably make people want to go home and quit and cry. For me, the tougher it gets the harder I work and the harder I come to prove myself that I can come get outs in the major leagues.''

The 35-year-old right-hander allowed three runs - two earned - and six hits in five innings. He struck out two, walked one, hit a batter and left after 77 pitches with the score 3-3.

Toronto acquired Jackson from Oakland on Saturday for $30,000. He began his tenure with his new team by throwing an 88 mph cutter that Joe Panik took for a called strike.

''We were thinking about 80 to 90 and he gave us 77,'' Toronto manager Charlie Montoyo said. ''He kept us in the game. He did a great job. He's going to give you all he's got every time he takes the mound, like he did today.''

Jackson had been tied with Octavio Dotel for most teams. Jackson agreed last month to a minor league contract with the A's and was 1-0 with a 6.75 ERA in three minor league starts.

In addition to the Blue Jays and Athletics, Jackson has played for the Los Angeles Dodgers, Tampa Bay, Detroit, Arizona, the Chicago White Sox, St. Louis, Washington, the Chicago Cubs, Atlanta, Miami, San Diego and Baltimore. He won a World Series title with the Cardinals in 2011.

''If I was one of those guys that was a nuisance to the clubhouse then it wouldn't feel as great,'' Jackson said. ''But knowing that the name that I've left behind for myself, on the field stuff, off the field, there's not too many people that have a lot of bad things to say about me. In that regard it feels great. The personality gives me a chance to have an opportunity to play with a team. Now I have to go get it done.''

Brandon Crawford hit a tiebreaking home run in the sixth off Ryan Tepera (0-2) after going 0 for 2 against Jackson.

''He's always been a tough at-bat for me,'' Crawford said. ''Threw me a nasty cutter in my second at-bat, and has always mixed speeds with his slider and changeup.''

Toronto has four starting pitchers on the injured list, including right-handers Clay Buchholz (shoulder) and Matt Shoemaker (out for the season after knee surgery), and left-handers Ryan Borucki (elbow) and Clayton Richard (right knee).

Mark Melancon (1-0) pitched out of a first-and-third, no-outs jam in the sixth for the win. Will Smith struck out the side in the ninth to remain perfect in 11 save chances.

Freddy Galvis hit an RBI double in the first, but Jackson gave up a run-scoring double to Pablo Sandoval in the bottom half. Garcia hit a two-run homer in the second after right fielder Billy McKinney dropped Kevin Pillar's short fly ball for an error.

''We didn't play our best defense and they got a couple of cheap runs but overall I thought he did a nice job,'' manager Bruce Bochy said. ''Couldn't get a hit to blow it open but he did his job.''

Toronto LHP Thomas Pannone was optioned to Triple-A Buffalo after going 1-3 with a 6.85 ERA in 14 games for the Blue Jays. RHP David Phelps and Shoemaker were transferred to the 60-day IL. Toronto also claimed RHP Jimmy Cordero off of waivers from Washington and optioned him to Buffalo. Cordero has not pitched in the majors this season. The 27-year-old was 1-2 with a 5.68 ERA in 22 games with the Nationals in 2018.

Giants: 1B Brandon Belt was rested because of a sore right knee. With an off day Thursday, the hope is that the inflammation in Belt's knee will go down. ... RHP Johnny Cueto (Tommy Jogn surgery) is expected to throw a 40-pitch bullpen Saturday in Arizona.

Giants: RHP Jeff Samardzija (2-1, 3.51) pitches against Arizona on Friday for the first time since 2017. Samardzija has struggled this season and has made it past five innings twice in eight starts.