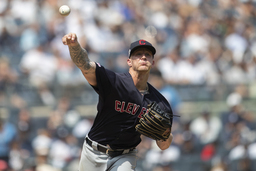 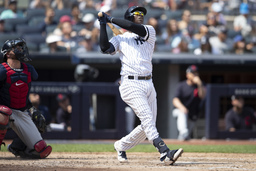 New York Yankees' Didi Gregorius watches the ball after hitting a home run during the fourth inning of a baseball game against the Cleveland Indians, Saturday, Aug. 17, 2019, in New York. (AP Photo/Mary Altaffer) 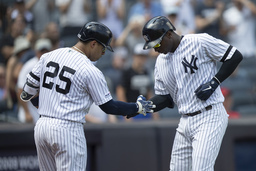 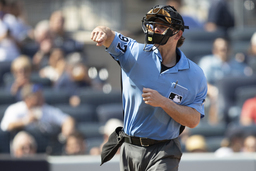 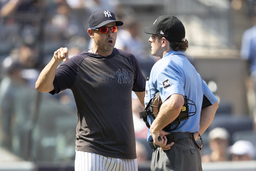 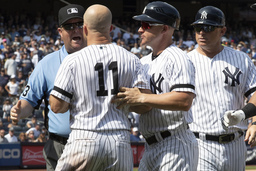 New York Yankees' Brett Gardner (11) argues with third base umpire Todd Tichenor after being ejected during the sixth inning of a baseball game against the Cleveland Indians, Saturday, Aug. 17, 2019, in New York. (AP Photo/Mary Altaffer) 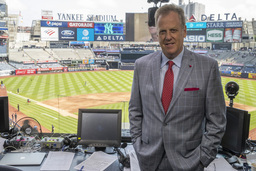 Michael Kay, YES Network announcer, poses for a portrait in the broadcast booth before the start of a baseball game between the New York Yankees and the Cleveland Indians, Saturday, Aug. 17, 2019, in New York. (AP Photo/Mary Altaffer)

NEW YORK (AP) Manager Aaron Boone, Brett Gardner and the New York Yankees again hammered away at the umpires, this time in prolonged rants that brought several members of the team spilling onto the field, while beating the Cleveland Indians 6-5 Saturday.

But what really fired up the crowd of 47,347 at Yankee Stadium occurred in the sixth inning after Cameron Maybin was called out on strikes by Triple-A ump Ben May.

For the third time in a month - each time with a minor league call-up umpire behind the plate - the team with the best record in American League lost its temper in a big way. This episode led to Boone, Gardner and pitcher CC Sabathia being ejected.

The pitch to Maybin was, according to strike zone charts, a bit outside. He calmly stood and discussed it with May and went back to the bench.

Moments later, things heated up in a hurry.

Boone came rushing from the dugout to confront May, and engaged in an animated argument. When Boone returned to the bench, all seemed calm - for a moment, anyway.

That's when Boone came back for another go at May, with crew chief Tom Hallion coming in from second base, trying to quell the beef. But at the same time, several Yankees were hollering from the dugout, engaging in a close-up argument with first base ump Phil Cuzzi.

Gardner was ejected after banging his bat against the dugout roof - it's become his habit when he gets upset - and then he climbed over the railing to continue to the dispute with Cuzzi. Coaches Phil Nevin, Marcus Thames and Josh Paul also were on the field, holding back Gardner, who was also arguing with third base umpire Todd Tichenor.

Last Friday, Gardner was tossed after a rant in Toronto. And on July 18, Boone screamed and hollered at a rookie umpire, leading to the expletive-filled rant that prompted the manager to call his hitters ''savages'' in the batter's box.

Aroldis Chapman closed for his 35th save in 40 chances.

YES broadcaster Michael Kay returned to the booth for the first time since July 2 after recovering from vocal cord surgery. The announcer who punctuates his home run calls with ''See ya!'' was shown on the videoboard in the third inning and got a nice cheer as the stadium sound system played the theme song from the TV show ''Welcome Back, Kotter.''

Indians: If RHP Carlos Carrasco returns to the club this season, it will be as a reliever. Carrasco threw 25 pitches of batting practice at Class A Lake County on Friday - it was his first time facing hitters since being diagnosed in June with a treatable form of leukemia. Carrasco could throw an inning Monday in a rehab appearance for Double-A Akron. A top starter in recent years, he hasn't pitched in the majors since May 30 and there's not much time to build up his strength to rejoin the rotation. But boosting the bullpen ''is something he can latch onto and be a part of our team and really help us,'' manager Terry Francona said.

Yankees: OF Aaron Judge was out of the lineup, a day after getting two hits following a 3-for-31 slump. Boone had said he wanted to give his slugger a day off this weekend.

Yankees: Sabathia (5-6, 4.78) is expected to come off the injured list to start Sunday. The 39-year-old has been out since July 28 with right knee inflammation.