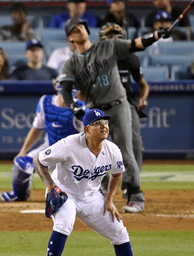 LOS ANGELES (AP) Los Angeles Dodgers pitcher Julio Urias has accepted a 20-game suspension by MLB for a domestic violence incident and is expected to return in September.

The league gave him credit for serving five games while he was on administrative leave in May, leaving 15 remaining to serve without pay.

MLB said Saturday that Urias has agreed not to appeal the discipline and will participate in an evaluation and treatment program.

The Dodgers said in a statement that they support MLB's decision while also being encouraged that Urias took responsibility for his actions. The team said it believes he will learn from the incident.

The 23-year-old reliever from Mexico was arrested in May and accused of shoving a woman. The charges were ultimately dropped, but MLB pursued its own punishment under the league's domestic violence, sexual assault and child abuse policy.