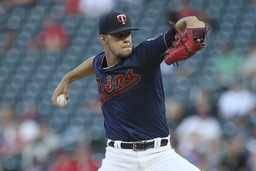 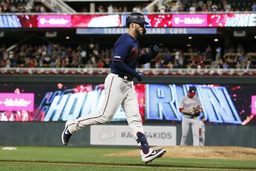 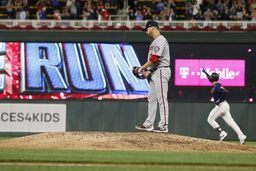 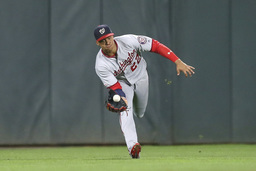 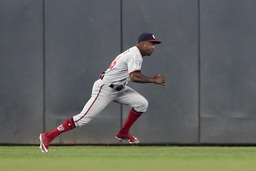 Washington Nationals center fielder Victor Robles gives chase on a single by Minnesota Twins' Willians Astudillo which broke up a no-hitter by Anibal Sanchez in the fifth inning of a baseball game Tuesday, Sept. 10, 2019, in Minneapolis. (AP Photo/Jim Mone) 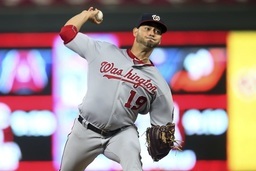 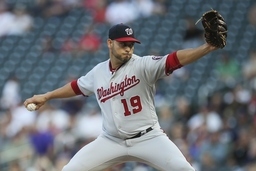 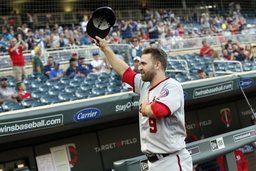 MINNEAPOLIS (AP) The Minnesota Twins badly needed their ace back.

Berrios surrendered only two singles over seven innings in his best start in six weeks, Mitch Garver hit the tiebreaking two-run homer in the seventh, and the Twins beat the Washington Nationals 5-0 on Tuesday night in an interleague matchup of teams on postseason tracks.

Minnesota's rotation has been under pressure, with Kyle Gibson weakened by a digestive track disease and Michael Pineda suspended for 60 games because of a positive test for a banned diuretic. Berrios only heightened fan anxiety with an 8.07 ERA over his previous six starts for the American League Central-leading Twins, who took a five-game lead on Cleveland into the night.

''Bad outings are in the past. Today, if you want to call it a new beginning, let's move forward,'' Berrios said through a team interpreter.

The right-hander shut down the Nationals with a machine-like performance that was one big sigh of relief for him and the Twins. Berrios (12-8) struck out four and walked one, his first turn of more than six innings since July 31.

''He was about as sharp as anyone could ever be. He made every pitch he wanted to,'' Twins manager Rocco Baldelli said. ''The stuff was excellent. He just looked great from beginning to end.''

Sergio Romo and Trevor May followed with a scoreless inning apiece to hand the Nationals their seventh shutout this season. In the eighth, the Twins padded their lead with a two-run double by Jorge Polanco and a sacrifice fly by Ehire Adrianza, and the Nationals took their sixth loss in eight games.

The sure sign Berrios was back in form was the joke he made when a reporter asked afterward if he'd altered his approach at all to try to snap out of the slump.

''Yes, I changed my underwear,'' he said in English, before explaining in Spanish how he better kept his chest centered through his windup.

Anibal Sanchez was almost as sharp for the Nationals, until the seventh. Eddie Rosario led off with a double, and Garver followed with his 30th homer in 280 at-bats this season. Sanchez (8-8) finished the inning, ending his evening with four hits and one walk allowed along with five strikeouts.

The Nationals are 9 1/2 games behind Atlanta in the National League East, in the first wild card spot. Their cushion above the cut shrunk to 3 1/2 games, ahead of Milwaukee. The Chicago Cubs have the second spot.

Sanchez, who was in spring training with the Twins in 2018 before they signed Lance Lynn and let him go, is 8-2 with a 3.61 ERA in his last 18 starts since coming off the injured list for a strained left hamstring. He had his hands full, facing Berrios.

''This guy's unbelievable. The preparation he got every single day for the game is good, and he shows right now how good he is on the mound,'' Sanchez said.

Joining Max Kepler (36) and Nelson Cruz (35), Garver gave the Twins a trio of 30-home run hitters for the first time since 1987, when they won their first World Series after Kent Hrbek, Tom Brunansky and Gary Gaetti reached the mark. The Twins have done that two other times in their 59-season history, in 1963 and 1964.

Pineda, who spoke to reporters for the first time since his suspension was announced on Friday, said before the game he plans to be at the ballpark as much as he's allowed to support his teammates during the stretch run. Pineda said he took an over-the-counter weight-management medication recommended by a person close to him, not realizing it contained the prohibited substance hydrochlorothiazide. The 6-foot-7, 280-pound Pineda has had elbow and knee trouble over the last few years.

''It's embarrassing. I feel obviously sad, which is why I'm here today in front of you guys because I let myself down, my family, my teammates, especially where we are in the season,'' Pineda said through a team interpreter.

Nationals second baseman Brian Dozier was not in the lineup, but he got his due with a pregame ovation from the crowd following a highlight video of his time with the Twins. Drafted in the eighth round in 2009, Dozier played in 955 games for the Twins until being traded at the deadline last year to the Los Angeles Dodgers. He hit 104 home runs over a three-year span from 2015-17. One of his teammates with the Twins, catcher Kurt Suzuki, is also with the Nationals.

Nationals: Suzuki was out for the second straight game with right elbow soreness. He's doing strengthening exercises and taking anti-inflammatory medication and could be able to pinch hit soon, Martinez said.

Twins: Kepler had testing done on his left shoulder that showed no damage, but he was on the bench again with 3B Miguel Sano (back), OF Jake Cave (groin) and OF/IF Marwin Gonzalez (oblique) also held back.

Nationals: Stephen Strasburg (16-6, 3.50 ERA) starts on Wednesday night, with rain in the forecast.