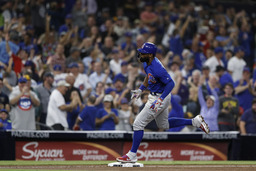 Chicago Cubs' Jason Heyward reacts after hitting a home run during the eighth inning of the team's baseball game against the San Diego Padres on Tuesday, Sept. 10, 2019, in San Diego. (AP Photo/Gregory Bull) 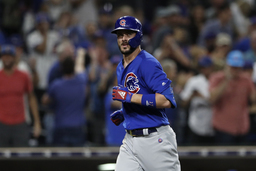 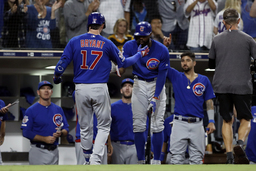 Chicago Cubs' Kris Bryant (17) is greeted by teammates after hitting a two-run home run during the eighth inning of the team's baseball game against the San Diego Padres on Tuesday, Sept. 10, 2019, in San Diego. (AP Photo/Gregory Bull) 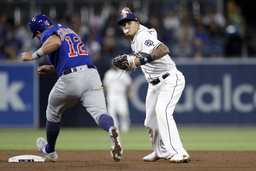 SAN DIEGO (AP) With the Chicago Cubs playing a five-man infield, Manuel Margot was looking for a pitch up in the strike zone that he could elevate.

Turned out he didn't even have to take his bat off his shoulder.

Margot drew a four-pitch, bases-loaded walk with one out in the 10th inning and the San Diego Padres overcame an impressive power display by Kris Bryant and Jason Heyward to beat the Cubs 9-8 Tuesday night.

The Cubs' lead for the second NL wild-card spot was cut to one game over Milwaukee and two over Philadelphia.

Bryant hit a pair of two-run homers and Heyward also homered twice and drove in three runs for the Cubs, who rallied from a 6-2 deficit in the third inning to tie it at 8 after Bryant and Heyward each hit their second home run.

But that show was wasted when Steve Cishek loaded the bases on a single and two walks in the 10th, and then issued a third straight walk, to Margot.

''I felt a bit more confident after he fell behind in the count because I think at that point you're just looking for a good pitch to hit but it didn't come and a walk works, too,'' Margot said through a translator.

Luis Urias started the winning rally when he beat out an infield single to shortstop with one out. Austin Hedges and Travis Jankowski walked to load the bases and bring up Margot.

The Cubs brought in right fielder Nicholas Castellanos to play first base and give them a five-man infield. It didn't matter, though as Cishek (3-6) walked Margot to bring in Luis Urias with the winning run.

''We came back. We fought hard,'' Cishek said. ''We all walked in ready to go. That's definitely the toughest part, was the fact that we came down from that deficit against a really good, evading pitcher. To be able to walk off on a walk is probably the worst possible thing to do.''

Padres manager Andy Green said it was ''fortunate'' to get three straight walks. ''That's not typically how you win baseball games. Little bit of fortune there. Sometimes you have to battle and grind for them, and sometimes they gift them to you.''

Cubs manager Joe Maddon said Cishek's wildness ''was kind of a surprise. He's been pretty well rested. We didn't see that coming. Even after he had walked a couple guys I still believe he's going to right himself. He's a groundball guy. He's the best guy for us under those circumstances to throw a ball into the five-man infield. It just didn't happen.''

Bryant's second homer pulled the Cubs to 8-7 after Anthony Rizzo hit a leadoff single in the eighth. Heyward tied it with his second of the night, a one-out shot to straightaway center. Both came off rookie Andres Munoz.

Bryant, who missed the previous two games with a sore right knee that required a cortisone shot on Sunday, has 28 overall and Heyward 21. It was the second multihomer game of the season for both players. Bryant has 12 multihomer games in his career while Heyward has eight.

''I like hitting here,'' said Bryant, who played at the University of San Diego. ''I really like this field. It's probably my favorite park to play in. I think the lights are brighter here. Everything about this place is awesome. I like coming here to play. I'll give credit to that.''

Heyward hit a two-run homer with one out in the second, with Bryant aboard on a leadoff walk.

The Padres went ahead 5-2 in the bottom of the inning, when second baseman Ben Zobrist's throwing error on rookie starter Ronald Bolanos' bases-loaded grounder allowed two runs to score. Bolanos was credited with his first RBI. Also in the inning, Urias hit an RBI single and Nick Martini had a sacrifice fly.

The Cubs got a run in the fourth thanks to video review. Heyward was originally called out on Martini's throw home on Ian Happ's flyball to left, but the call was overturned after a review and Happ was credited with a sacrifice fly.

Bryant's two-run homer with two outs in the fifth pulled the Cubs to 6-5.

San Diego went up 8-5 in the seventh when Margot's hit an RBI triple and scored on Martini's single.

Cubs: INF Addison Russell remained in the concussion protocol after being beaned in Sunday's game at Milwaukee.

Padres: Rookie RHP Chris Paddack (8-7, 3.54) will face the Cubs for the first time. On San Diego's last road trip, he threw 12 1/3 innings of one-run ball in starts against San Francisco and Arizona.