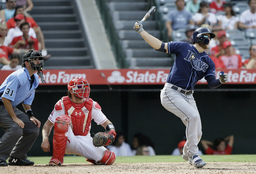 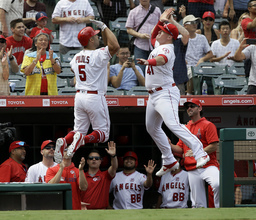 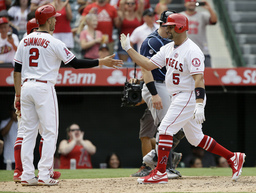 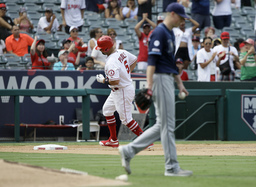 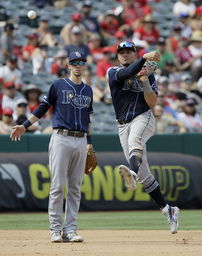 ANAHEIM, Calif. (AP) After stumbling against the Los Angeles Angels, the Tampa Bay Rays head up the coast what appears to be an even more challenging series against the Dodgers.

Albert Pujols hit a three-run homer off Ryan Yarbrough in the fifth inning and drove in four runs, leading the Angels over Tampa Bay 6-4 Sunday to drop the Rays 1 1/2 games behind Oakland for the top AL wild card.

Seeking their first playoff berth since 2013, the Rays are 1 1/2 games ahead of Cleveland for the AL's second wild card after losing for the third time in five games.

''Every game matters. It's magnified at this point and for good reason,'' Rays manager Kevin Cash said. ''Losses are a tick more frustrating. Wins are a tick more exciting. But we get to come back and enjoy our day off in LA and play a really good baseball team.''

Tampa Bay trailed 6-1 before Austin Meadows' 31st homer, a three-run drive off Ty Buttrey with two outs in the eighth. Hansel Robles struck out pinch hitter Ji-Man Choi, then worked around a leadoff walk in the ninth for his career-high 21st save in 24 chances.

After learning that two-time AL MVP Mike Trout will have foot surgery and miss the rest of the season, Los Angeles stopped a six-game losing streak. On Saturday, the Angels ensured their fourth straight losing record.

Pujols tied the score with an RBI double in the first and blew open the game with his 23rd home run this season, the 656th of his big league career.

Yarbrough (11-4) gave up six runs and 10 hits in five innings. He entered with five straight no-decisions since beating Seattle on Aug. 11.

''Yarbs wasn't his sharpest,'' Cash said. ''The command just wasn't there. He just didn't look crisp for whatever reason.''

Noe Ramirez (5-2) retired six straight batters to win in relief of rookie Patrick Sandoval, who allowed two hits in four innings but was removed after 61 pitches.

Pujols moved within four home runs of tying Willie Mays for fifth on the career list.

Brendan McKay, the Rays' two-way player, had his first career hit in the eighth inning. McKay, who pinch hit and singled, had been 0 for 5 at the plate. ... Jared Walsh, a two-way player for the Angels, doubled in the second inning.

Rays: LHP Blake Snell (6-7, 4.28 ERA) is expected to be activated from the IL to start Tuesday against the Los Angeles Dodgers. Snell, who had loose bodies in his left elbow, has not pitched for the Rays since July 21.