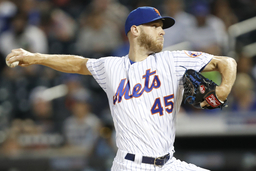 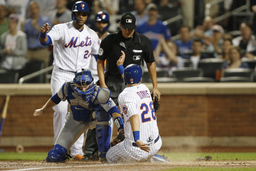 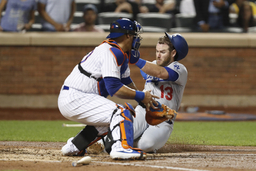 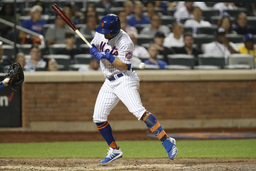 New York Mets' J.D. Davis (28) reacts as he is hit by a Dustin May pitch in the seventh inning of a baseball game against the Los Angeles Dodgers, Sunday, Sept. 15, 2019, in New York. (AP Photo/Kathy Willens) 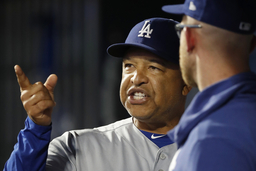 Los Angeles Dodgers manager Dave Roberts, left, talks to a member of his staff between innings of a baseball game against the New York Mets, Sunday, Sept. 15, 2019, in New York. (AP Photo/Kathy Willens) 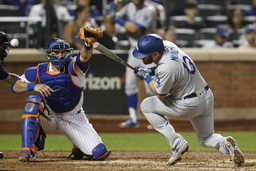 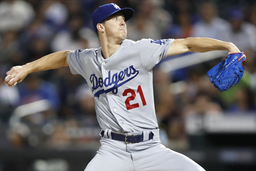 Gyorko scored the tying run in the eighth inning on Chris Taylor's double and hit an RBI single off Seth Lugo (6-4) with two outs in the ninth to put the NL West champions in front. They moved four games ahead of Atlanta for the best record in the National League with 11 to play and closed within one game of the New York Yankees for the top mark in the majors.

Brandon Nimmo laced a two-run triple for the Mets, who managed only three hits and wasted an excellent start from Zack Wheeler. They completed their penultimate homestand 6-4 and dropped four games behind the Chicago Cubs for the second NL wild card to with 13 to go. Milwaukee is three games ahead of New York.

Rookie slugger Pete Alonso went 0 for 4 and is hitless in a career-worst 20 consecutive at-bats.

Kike Hernandez got the Dodgers going in the ninth with a one-out double off the left-center wall against Lugo.

Scuffling closer Kenley Jansen (5-3) worked a perfect eighth, and Kenta Maeda got two outs for his fifth career save and second this season.

Wheeler pitched seven outstanding innings for the Mets, and Justin Wilson was summoned to protect a 2-1 lead in the eighth. But the left-hander, who saved Saturday night's win with a perfect ninth and had a 1.40 ERA since coming off the injured list July 2, was out of sorts.

He issued a leadoff walk to Gyorko, who was pinch-hitting, and balked him to second. An up-and-in wild pitch that sent Max Muncy sprawling to the ground moved Gyorko to third, and he scored on Taylor's one-out double off the right-center wall.

Wilson struck out Mets nemesis Corey Seager, and Lugo avoided additional damage when Will Smith flied out to the left field warning track with two on.

In the second, Nimmo lined the 10th pitch of his at-bat against All-Star Walker Buehler just fair down the right field line for a two-run triple.

Seager shaved it to 2-1 with a two-out RBI single in the fourth. Muncy scored with a good slide on a close play at the plate.

Buehler was pulled after 71 sharp pitches in an abbreviated October tuneup. He permitted two hits over five innings and retired his final 11 batters after Nimmo's triple.

Dodgers: 3B Justin Turner is expected back in the lineup Tuesday and Wednesday against Tampa Bay. He hasn't played since Sept. 7 due to a sprained left ankle. ... Muncy's leadoff single in the fourth was his first hit since Aug. 25, snapping an 0-for-14 skid. He returned Friday from a fractured right wrist that had sidelined him since Aug. 29. Muncy finished 1 for 5 with three strikeouts. ... With two off days this week, the team's top three starters - Clayton Kershaw, Hyun-Jin Ryu and Buehler - will all get extra rest before pitching next weekend against Colorado.

Mets: 3B Todd Frazier was available off the bench, manager Mickey Callaway said. Frazier was hit on the left hand by a pitch late in the game Saturday night. ... LF J.D. Davis was pulled for speedy pinch-runner Sam Haggerty after getting hit in the left side by a 96 mph fastball from Dustin May in the seventh. Davis appeared to be OK, and probably would have been removed for defense the following inning anyway.