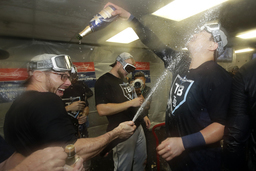 HOUSTON (AP) Eric Sogard is in Tampa Bay's lineup for the decisive Game 5 in the AL Division Series at Houston, the first start in nearly a month for the second baseman who has dealt with lingering right foot discomfort.

Sogard's only appearance this postseason before Thursday night's game was as a pinch-hitter in Game 1 on Friday, when he had an RBI single.

Sogard's last start was Sept. 14, and he made his final appearance in the regular season the following day as a pinch-hitter.