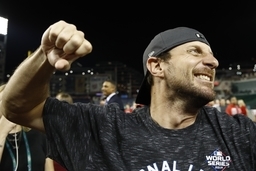 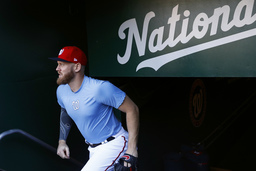 Washington Nationals pitcher Stephen Strasburg walks out of the clubhouse to participate in a baseball workout, Friday, Oct. 18, 2019, in Washington, in advance of the team's appearance in the World Series. (AP Photo/Patrick Semansky) 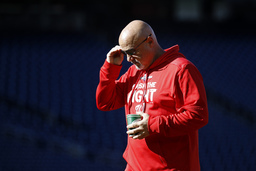 Washington Nationals general manager Mike Rizzo walks on the field during a baseball workout, Friday, Oct. 18, 2019, in Washington, in advance of the team's appearance in the World Series. (AP Photo/Patrick Semansky) 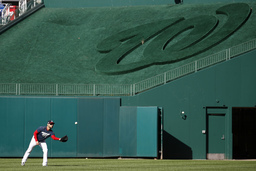 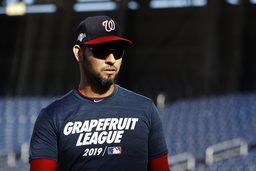 Washington Nationals pitcher Anibal Sanchez walks on the field during a baseball workout, Friday, Oct. 18, 2019, in Washington, in advance of the team's appearance in the World Series. (AP Photo/Patrick Semansky)

WASHINGTON (AP) It had the feel of spring training Friday at Nationals Park, what with the clear blue sky, the crisp breeze and temperature in the low 60s that made it feel like time for the Fall Classic or February, the start-of-camp baserunning drills and the navy ''Grapefruit League'' T-shirt worn by Anibal Sanchez.

As Sanchez did some long toss in right field, the other members of Washington's postseason rotation that carried the club to the World Series - Max Scherzer, Stephen Strasburg and Patrick Corbin - worked out, too.

Nationals general manager Mike Rizzo assembled it, he explained, because an emphasis on starting pitchers has ''always been a part of my DNA as an executive.''

In this day and age of ''openers'' and ''bullpen days'' and ''a starter shouldn't face a lineup a third time'' and ''high-leverage relief,'' Rizzo's Nationals stick by an older set of words: ''Good pitching beats good hitting.''

Scherzer, Strasburg, Corbin and Sanchez - neither Rizzo nor manager Dave Martinez would commit to the order in which they'll pitch when the Series opens Tuesday night, but that's a decent guess - all go about things differently, but they've helped each other get this far. Now the Nationals have a week off to set up that quartet so it's rested and ready to face the Houston Astros, who are built around their own starters Justin Verlander, Gerrit Cole and Zack Greinke, or New York Yankees.

''Good starting pitching, to me, is the key to any long-term kind of success that you're going to have. I think that when you have the opportunity to have guys that can dominate a game for six, seven, seven-plus innings, I think that is the more proficient way to construct a way to win a baseball game,'' Rizzo said. ''I think that there's certainly different ways to skin a cat, there's ways to win championships, but my philosophy has always been that. And it's served us well here.''

He traced it back to his days in the front office of the Arizona Diamondbacks, who won a championship in 2001 on the strength of the shoulders of Randy Johnson and Curt Schilling.

Washington's starters have an MLB-low 2.04 ERA this postseason and are coming off quite a sweep of the St. Louis Cardinals in the NL Championship Series, allowing a grand total of four earned runs across the four games.

''For us,'' first baseman Ryan Zimmerman said, ''it's, for sure, kind of the backbone of our team.''

And Sanchez? He was 11-8 with a 3.85 ERA and 134 Ks in 166 innings - then all he did in the NLCS was carry a no-hitter into the eighth inning of Game 1, before Scherzer took his own bid into the seventh of Game 2. They, like Strasburg in Game 3, did not allow an earned run, adding up to the second-longest such streak by an NL team in a single postseason.

Corbin allowed four runs in Game 4, but only after the Nationals led 7-0, and he set a major league postseason record by striking out 10 in the first four innings to finish with 12 Ks, the same total Strasburg reached a night earlier.

''To have Sanchez go out and do what he did, and Max back that up and then Stephen: It seemed like every game, we gave our team a chance to win,'' said Corbin, who arrived last offseason as a $140 million free agent. ''To do what we did against St. Louis, who's a very good team, was pretty impressive. Everyone here is focused to try to do it again.''

They help each other get it done, too, discussing how to approach an opponent's hitters and keeping an eye on each other's bullpen sessions between starts.

And none is really alike, either.

Corbin, the lone lefty in the group, succeeds with a devastating slider. Scherzer lives up to his Mad Max nickname, grunting and cursing and stomping around the mound while getting into the high 90s on his fastball. Strasburg, once a fireballer, has grown into a crafty pitcher who overcomes a post-surgery drop in velocity with a nearly unhittable changeup and a tricky curve that combined to earn all of his dozen Ks against the Cardinals. Sanchez, meanwhile, is the man of a million pitches, with multiple changeups that keep batters guessing.

''It's nice (to see) the kind of old school way, I guess you can say now, of having your starting pitchers go deep into the games,'' Suzuki said, ''to get to the back end, not just relying on your bullpen.''