Astros' Pressly appears to reinjure knee on only pitch 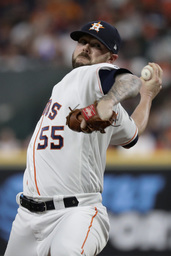 HOUSTON (AP) Houston Astros shutdown reliever Ryan Pressly appeared to reinjure his right knee when recording an out on the only pitch he threw in Game 6 of the AL Championship Series.

Pressly came on with the bases loaded and two outs in the third inning Saturday night against the New York Yankees.

After Didi Gregorius hit a soft dribbler on the first pitch, Pressly came off the mound and fielded the ball and was clearly in pain after planting his right leg while going toward the line. Pressly, basically dragging his right foot, met Gregorius in the base line and tagged him out.

Pressly, who grimaced as he went toward the dugout, had arthroscopic surgery on the same knee on Aug. 22 and returned Sept. 20.

It was the sixth appearance this postseason for Pressly. He was awarded the win in Game 4 after striking out consecutive batters to leave the bases loaded in the fifth inning.

The Astros are using a bullpen game to try to wrap up the ALCS and get to the World Series for the second time in three seasons. Pressly was the third pitcher used and was replaced by Jose Urquidy to start the fourth. Urquidy allowed a solo homer to Gio Urshela, the second batter he faced.