Beltrán: Need to be "best friend" to Mets' GM as manager 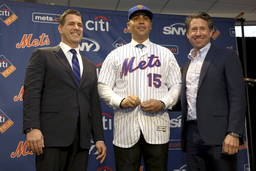 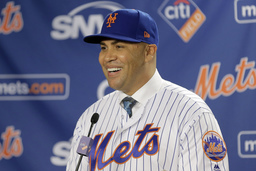 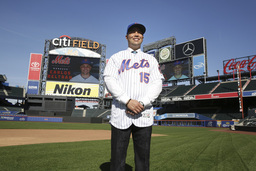 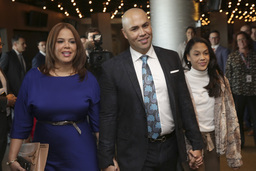 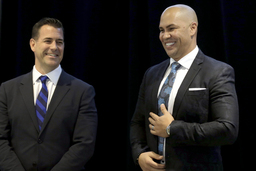 NEW YORK (AP) Carlos Beltran was back in familiar blue pinstripes Monday, buttoning up a New York Mets uniform while standing next to his new boss, Brodie Van Wagenen.

The first-time manager is taking over following a tenuous season at Citi Field, and his plan to calm the clubhouse works from the top down. That means Van Wagenen isn't just getting a new employee.

''When you're a manager, literally, your GM has to be your best friend,'' he said.

Beltran was introduced as Mets manager by Van Wagenen and Mets Chief Operating Officer Jeff Wilpon during a news conference in Queens. Beltran, who spent seven of his 20 seasons as a player with the Mets, identified inconsistency as the culprit for New York's rocky and disappointing 86-win season.

That's been an issue in Flushing. Recently fired manager Mickey Callaway was fined by the Mets for cursing out at a beat reporter in June, and the next day, it took him two news conferences to issue an apology. Star pitcher Noah Syndergaard was irked when private conversations with the front office about his battery preferences became public in September.

And of course, there's the time Van Wagenen threw a chair in frustration during a meeting with the coaching staff prior to the All-Star break.

Van Wagenen thinks this hand-picked manager - he inherited Callaway when he moved from player agent to GM last fall - can clean up behavior behind the scenes.

''It was important for all of us in the ownership group and the baseball operations department to feel like we could exhale when we walked into the manager's office,'' Van Wagenen said. ''We didn't want to inhale in anticipation of conversations.

Van Wagenen and Beltran spoke on the phone for 30 minutes before the interview process even began. A nine-time All-Star during 20 seasons as a player, Beltran was recommended highly by Mets assistant GM Allan Baird and special assistant Omar Minaya based on prior relationships.

Even though he's never managed, the 42-year-old from Puerto Rico made the Mets confident he was ready for the role over the course of five more interviews.

''My time one-on-one with Carlos was really the key in terms of my comfortability,'' Van Wagenen said.

Beltran retired as a player after helping Houston win the 2017 World Series and took a job before the 2019 season as special adviser with the New York Yankees. He worked closely with longtime general manager Brian Cashman, sitting in on crucial front office meetings and routinely operating as a bridge between number crunchers and the clubhouse.

''I went to the Yankees' organization willing to learn,'' he said.

He plans to be player-friendly - ''I'm not a rules person'' - and also wants to work closely with the analytics department. Based on his experience with the Yankees, he's seeking every edge available, even if it involves a little gory math.

Beltran has spoken to other former players-turned-first-time managers, including Boston's Alex Cora and the Yankees' Aaron Boone. They told him to ''be authentic'' and boosted his confidence about his readiness.

Even with that, Beltran is seeking a veteran coaching staff to cover for his inexperience at that end of the bench. He's working with the front office to select coaches now. The team is uncertain when that process will be completed.

''I do need experience, and there's no doubt about that,'' Beltran said. ''We are reaching out. We're going to reach out to coaches that have experience, but most importantly, I don't want to bring names, I want to bring guys that are passionate.''

Beltran and Van Wagenen declined to say whether former manager Terry Collins was a candidate to be bench coach, but Beltran said he's already spoken to Collins and will use him as a mentor whether he's on staff or not. Beltran played half a season under Collins in New York and said he'd draw from the 70-year-old's energy as inspiration. Collins is currently a special adviser to Van Wagenen.

Righties Seth Lugo and Robert Gsellman are working this offseason to pitch in the rotation next year, Van Wagenen said. The club hopes to add pitching, but whether that's in the rotation or the bullpen may depend on whether Wheeler returns and where Lugo and Gsellman ultimately fit.

''We're going to be creative with the roster,'' he said.

Van Wagenen said he's uncertain whether injured outfielder Yoenis Cespedes will play in 2020. Cespedes broke his ankle in May while recovering from surgery on both heels and has been out most of the past two seasons. The 34-year-old is entering the final season of a $110 million, four-year contract.