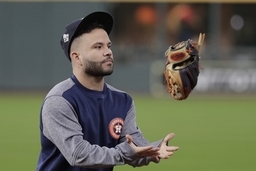 CARACAS, Venezuela (AP) The Venezuelan baseball league will start on Tuesday amid uncertainty because of Washington's sanctions against the administration of President Nicolas Maduro.

Players affiliated to Major League Baseball are forbidden to join in.

Venezuela's economic crisis forced the coming season to be reduced from 63 to 43 matches for each of the six teams.

The league has so far failed to avoid sanctions by U.S. President Donald Trump, who wants Maduro out of office. Venezuela was excluded from the deal that regulates the relationship between MLB and Caribbean winter tournaments.

The sanctions, which include freezing the assets of Maduro's administration in the United States, forbid American companies from doing business with Venezuela's government.

Many local fans wonder if substitutes for Venezuela's MLB players will be able to fill their shoes. They will also miss American players, who have been playing in the Venezuela league since it began in the 1940s. The likes of Bob Gibson, Barry Bonds, and Pete Rose have featured.

''I can't even remember when was the last time that a gringo did not play in a team of our league,'' said 71-year-old Jose Miguel Reyes, a fan of the Leones of Caracas. ''Many stars of MLB were here, the best of them.''

Venezuelans have also starred in the MLB recently, including Cincinnati third baseman Eugenio Suarez, who hit 49 home runs this season, and Houston second baseman Jose Altuve, the fourth Venezuelan to be World Series MVP, in 2017.

Beside Altuve, six Venezuelans played in the World Series won by the Washington Nationals last week.

Fans fear lower attendances because of the absence of MLB affiliated players.

Most of the 48 foreigners in Venezuela's league are from the Dominican Republic. Each team can sign up to six internationals.

Venezuela league organizers gave up on a sponsorship deal with state-run oil giant PDVSA in an attempt to assure Washington that it is independent from Maduro's administration.

The response to the move is on hold, says Domingo Alvarez, the general manager of the Venezuela league. It could be too little, too late.

The winner of the league represents Venezuela in the Caribbean Series.