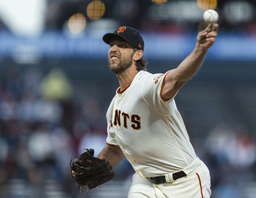 In this Sept. 9,2019, file photo, San Francisco Giants starting pitcher Madison Bumgarner throws against a Pittsburgh Pirates' batter in the second inning of a baseball game in San Francisco. Bumgarner has received a $17.8 million qualifying offer from the Giants, a move that likely will decrease demand for him in the free-agent market. (AP Photo/John Hefti, File) 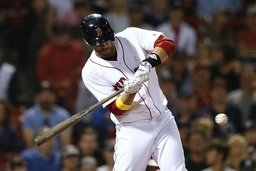 In this Sept. 7, 2019, file photo, Boston Red Sox's J.D. Martinez hits a solo home run during the ninth inning of a baseball game against the New York Yankees in Boston. Red Sox designated hitter Martinez has decided to keep his contract with the team instead of becoming a free agent again. (AP Photo/Michael Dwyer, File)

NEW YORK (AP) Madison Bumgarner was among 10 free agents who received $17.8 million qualifying offers from their former teams on Monday, a move that likely will decrease demand for the 30-year-old left-hander.

Bumgarner, the 2014 World Series MVP, went 9-9 with a 3.90 ERA over 34 starts this year after two injury-shortened seasons. San Francisco also made a qualifying offer to left-handed reliever Will Smith.

On the day before free agents can start negotiating contracts with all teams, Red Sox designated hitter J.D. Martinez decided to stay in Boston instead of becoming a free agent, declining an option that would have voided the last three years and $62.5 million owed as part of the $110 million, five-year contract he signed after teams had reported to spring training in 2018.

Elvis Andrus is staying with the Rangers after the shortstop passed on a second chance to opt out of his contract, give up $43 million over the next three years and become a free agent.

Milwaukee cut $15 million in payroll for next season, trading right-hander Chase Anderson to Toronto for outfield/first base prospect Chad Spanberger and declining a $7.5 million option on power-hitting first baseman Eric Thames. Anderson was 8-4 with a 4.21 ERA in 27 starts and five relief appearances. Milwaukee had planned to decline his $8.5 million option, which would have made him eligible for salary arbitration, and Toronto exercised the option following the trade.

A new team signing a player who turned down the qualifying offer would lose at least one pick in next year's amateur draft as compensation unless a deal is struck after the draft starts in June. Compensation caused pitchers Dallas Keuchel and Craig Kimbrel to wait until after the draft to sign 2019 deals.

The New York Yankees failed to make a $17.8 million qualifying offer to Didi Gregorius and will not receive draft-pick compensation if the free-agent shortstop signs with another team. Gregorius, who turns 30 in February, came back from Tommy John surgery in early June and hit .238 with 16 homers and 61 RBIs in 82 games. If New York doesn't re-sign Gregorius, it could move Gleyber Torres from second to shortstop, make DJ LeMahieu the regular second baseman and allocate more payroll to starting pitching.

The price of the qualifying offer is determined by the average of the top 125 major league contracts this year and it dropped by $100,000.