Cardinals agree to deal with Adam Wainwright for 2020 season 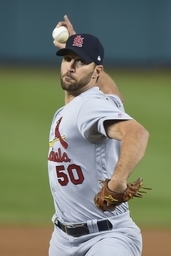 ST. LOUIS (AP) The St. Louis Cardinals and Adam Wainwright have agreed to a contract for next season, raising the likelihood that the veteran pitcher finishes his career with the only major league team he has ever played for.

The 38-year-old Wainwright was drafted by the Braves in 2000 and traded to the Cardinals three years later. He made his major league debut in 2005 and has been a stalwart for St. Louis over the past 14 seasons, going 162-95 with a 3.39 ERA and three All-Star game appearances.

He played last season on a $2 million deal and proved he was still effective, going 14-10 with a 4.19 ERA while helping the Cardinals reach the National League Championship Series.

Only two players, Jesse Haines and Bob Gibson, have played more seasons for the Cardinals.