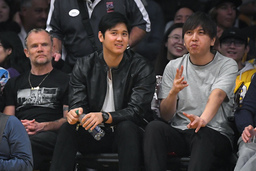 Los Angeles Angels pitcher Shohei Ohtani, center, watches along with Flea, left, of the Red Hot Chili Peppers, and Ohtani's interpreter Ippei Mizuhara during the second half of an NBA basketball game between the Los Angeles Lakers and the Washington Wizards, Friday, Nov. 29, 2019, in Los Angeles. The Lakers won 125-103. (AP Photo/Mark J. Terrill)

SAN DIEGO (AP) Once Shohei Ohtani completes the final phase of his recovery from Tommy John surgery later this month, the Los Angeles Angels will confer with surgeon Dr. Neal ElAttrache and the team's medical staff to determine how to proceed with the Japanese two-way star's throwing program.

Ohtani threw another bullpen session Wednesday and has worked up to about 50 pitches, general manager Billy Eppler said. The team may decide to keep pushing him from the mound or flat ground, but he may also take time off before ramping up again for spring training.

''The first step is going to be get through what he needs to get through and then talk to Dr. ElAttrache and talk to our medical personnel and come up with a plan,'' Eppler said. ''He's throwing now at this time of year at more intensity than other pitchers are and other starters.

Ohtani is throwing at 85%, and the Angels would like him to reach about 90%. Eppler said some pitchers on the staff will have their innings monitored - Ohtani likely one of them - without offering specifics at this stage. He does plan to keep Ohtani pitching once a week and hitting four days a week if all goes well.

Eppler later Wednesday reached a $245 million, seven-year agreement with third baseman Anthony Rendon, a person with knowledge of the deal told The Associated Press on condition of anonymity because the agreement had not been announced and was pending a successful physical.

The 25-year-old Ohtani had surgery on his left kneecap in September, but the reconstructed elbow is most concerning for the Angels.

Ohtani got back on the mound last week and pitched a bullpen in front of new pitching coach Mickey Callaway in Anaheim on Monday.

The 2018 AL Rookie of the Year finished his second major league season batting .286 with 18 homers and 62 RBIs in 106 games as the Angels' designated hitter.