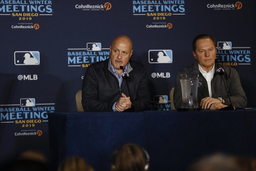 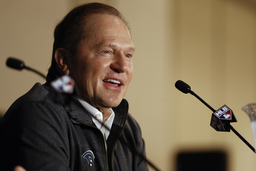 Baseball's most prominent agent dominated each of the three full days of meetings with a nine-figure contract, deals for Stephen Strasburg, Gerrit Cole and Anthony Rendon that totaled $814 million.

Just two trades were announced: The San Francisco Giants acquired shortstop Zack Cozart and infield prospect Will Wilson from the Los Angeles Angels for a player to be named or cash, and the Chicago White Sox obtained outfielder Nomar Mazara from the Texas Rangers for outfield prospect Steele Walker.

''I think it's hard to say that there hasn't been a trend,'' new Boston Red Sox chief baseball officer Chaim Bloom said. ''It's important not to get too focused on artificial timetables. You want to be prepared to do something when you think it's going to help you, but you don't want to force anything.''

Just 25 of the 168 players who exercised their right to become major league free agents last month had finalized deals when the meetings ended Thursday, slightly ahead of the 21 of 164 when last year's session ended in Las Vegas. The pace of talks does seem faster.

''It feels to me like there's going to be continued action in free agency in the days to come and early next week,'' Chicago Cubs general manager Jed Hoyer said. ''It seems like there's probably some free agent deals that are closer to fruition. They're not ready to be announced yet, but there's a lot of activity. I think as those things get finalized, it will clarify the trade market.''

- outfielder Brett Gardner stayed with the New York Yankees after the best offensive season of his career, agreeing to a one-year contract that guarantees $12.5 million.

- catcher Austin Romine left the Yankees and agreed to a $4.15 million, one-year contract with Detroit.

People with knowledge of the deals revealed them to The Associated Press on condition of anonymity because the agreements had not been announced.

Also on the final day of the meetings, Major League Baseball said it will start testing for opioids and cocaine, but only players who do not cooperate with their treatment plans will be subject to discipline.

Marijuana will be removed from the list of drugs of abuse and will be treated the same as alcohol as part of changes announced to the joint drug agreement between MLB and the players' association. In addition, suspensions for marijuana use will be dropped from the minor league drug program.

Opioids are classified as a drug of abuse under the joint big league program, which began in late 2002 and until now has limited testing to performance-enhancing substances and banned stimulants.

Talks of adding testing for opioids began following the death of Los Angeles Angels pitcher Tyler Skaggs, who was found dead in his hotel room in the Dallas area on July 1 before the start of a series against Texas. A medical examiner's office said the 27-year-old died after choking on his vomit and with a toxic mix of alcohol and the painkillers fentanyl and oxycodone in his body.