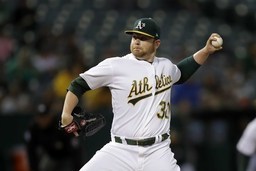 The 31-year-old left-hander was 13-9 with a 3.89 ERA in 31 starts with Oakland last season, when he had a $1.5 million base salary and earned $1 million in performance bonuses based on starts.

''We looked at Brett as a pitcher who has proven throughout his career that when he's able to stay healthy, he's been effective,'' Brewers general manager David Stearns said. ''He's someone who throws strikes consistently. He keeps the ball on the ground, and we like the additional left-handed presence he gives us in our rotation.''

Milwaukee has just 12 players left from the 25 on its Division Series roster against Washington.

Anderson has been hurt throughout his 11-year big league career. Anderson had back surgery for a herniated disk at the end of the 2014 season and again in 2016 for a bulging disk. He had Tommy John surgery in 2011 and has missed time with an oblique strain and broken finger.

''Any time there have been injuries and have missed time or a player has missed time because of an injury like Brett has over the course of his career, there's going to be an increased emphasis placed on that,'' Stearns said. ''But we are comfortable, based on durability last year when he logged over 175 innings and made over 30 starts, that we have a player who is capable of making a similar output for us moving forward.''

''My goal first is just to be healthy,'' Anderson said. ''As far as teams go, I've been around the league a little while now, on both sides of it, but I wanted a team that's going to be competitive. I've been on teams that haven't been very good and on teams that have been pretty good, so it's nice to have a competitive team. That was one of the biggest priorities. It's a little bit similar to Oakland in that it's a smaller market.''

Anderson has induced ground-ball outs 56.8% of the time over his career. His 4.6 strikeouts per nine innings last season was the lowest among qualified starters in the majors. Anderson began throwing a cutter last season, using it 14% of the time.

''Just something that wasn't going away from righties, that I could jam them a little bit,'' Anderson said. ''I don't have the same velocity on my fastball or arm speed on my slider that I had when I was 21, so I wanted another pitch tie up righties so they couldn't dive over the plate on the sinker and changeup. It was an effective pitch for me. It's not the best pitch; it's a work in progress. But if I can get a pitch that's trending in that direction, I'll take it.''